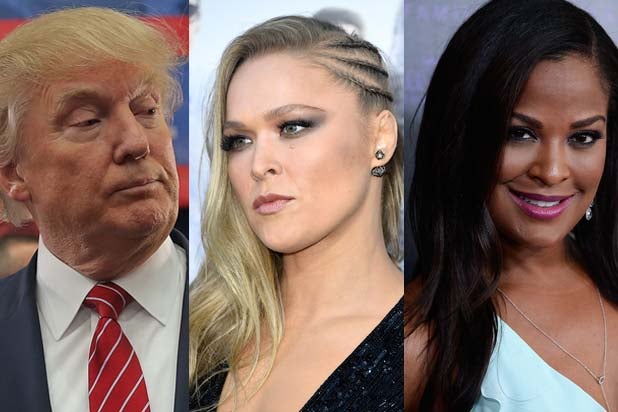 Donald Trump and Laila Ali have something in common: They don’t think Ronda Rousey is worth the hype.

The GOP presidential candidate was first to take a swing at the former UFC champion after she was knocked out by challenger Holly Holm on Saturday.

Why the hard feelings? Probably because Rousey didn’t support his presidential ambitions after Trump had told CNN in August that he’d “take her on my side as a fighter.”

Rousey told the same network that she wouldn’t vote for him.

“I just really wouldn’t trust the guy with running my country, that’s all,” Rousey said. “I’m not really going to get into specifics of it, but, I mean, I don’t want a reality TV star to be running my country.”

See Video: Ronda Rousey Busts Interviewer's Ribs After He Jokes She 'Can't Compete With a Man'

Muhammad Ali’s daughter, a retired boxer with an undefeated record, told TMZ she was not surprised to see Holm beat up Rousey.

“In order to be the best in the world, you definitely don’t ever get beat up like that in your prime, period,” Laila said. “I don’t think she should have a rematch with Holly Holm, because I think it would go the same way the second time — probably worse.”

Watch the former fighter weigh in on Rousey’s loss in the video below.