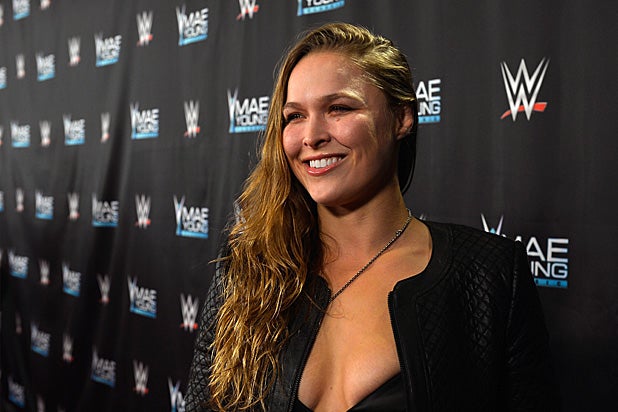 Ronda Rousey will officially sign a contract with WWE in two weeks at the “Elimination Chamber” pay-per-view, it was announced on Monday’s “Raw.”

“Raw” general manager Kurt Angle shared the news from the ring at the SAP Center in San Jose, Calif., as the roaring crowd rejoiced.

The “Elimination Chamber” pay-per-view takes place on Feb. 25 from the T-Mobile Arena in Las Vegas. This will be the final “Raw” pay-per-view before WrestleMania 34, which many fans hope Rousey will play a major part in.

Along with the former UFC champion’s first official entry, the “Elimination Chamber” pay-per-view will also feature the first Women’s Elimination Chamber Match. In the men’s match, The Miz will enter at number one after his loss to John Cena on Monday’s show.

“This is my life now. First priority on my timeline for the next several years. This is not a smash-and-grab; this is not a publicity stunt,” Rousey told ESPN in an interview last month. “When I first met with Triple H, I told him, ‘There are other things I can do with my time that’ll make way more money, but I won’t enjoy nearly as much.'”

As for her recent surprise appearance in the Women’s Royal Rumble match, Ronda said: “I’m like — this is the most overstimulated I’ve ever been in my life and… I’m just, like I’m still processing it.I’m so happy and I don’t have words for it — and I usually have words for everything. This never happened before.”

Having won 12 consecutive MMA fights — six in the UFC — Rousey suffered her first loss to Holly Holm in November 2015, despite being a heavy favorite.

She then took a year off before returning to face Amanda Nunes in December 2016 in the main event at UFC 207. She lost that fight via TKO due to punches at just 48 seconds into the first round.

Rousey has long been a wrestling fan and even her nickname, “Rowdy,” was taken from late professional wrestler Rowdy Roddy Piper. She made a special appearance at the height of her UFC fame at WrestleMania 31 during an in-ring argument between Dwayne Johnson and the Authority (Stephanie McMahon and Triple H) in which she helped The Rock take down his enemies.

Along with her action in the Octagon and the wrestling ring, Rousey made her name in Hollywood with roles in “The Expendables 3” “Entourage” and “Furious 7,” and will soon be seen in “Road House.”