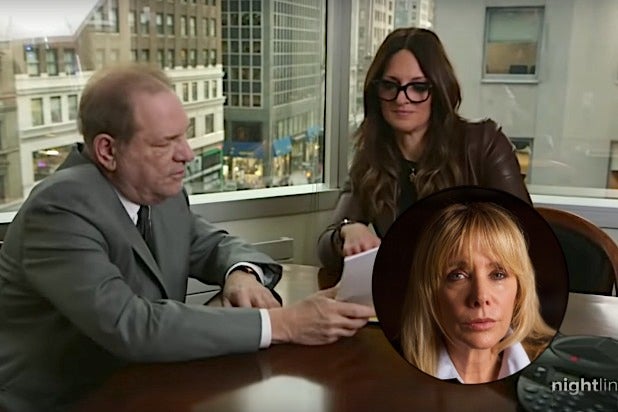 “ABC’s Nightline’s grossly irresponsible, one-sided reporting is shameful and deeply detrimental to the survivors like myself who were assaulted and abused by Harvey Weinstein,” Arquette told TheWrap.

In the segment, ABC News reporter Amy Robach sat down with Weinstein’s attorney, Donna Rotunno, who explained her plan to defend Weinstein ahead of his Jan. 6 trial, and dismissed accusations made by the more than 80 women who accuse Weinstein of sexual misconduct, from harassment to rape.

“It sends a dangerous message to women that by reporting a crime, we will be subjected to victim-blaming and not be believed,” Arquette continued. “As his trial date approaches, I stand by the brave women who are testifying to ensure that their voices are heard and will fire back at any misrepresentations of the truth. Despite Weinstein’s lawyer’s attempts to distort the facts, I believe his days of destroying lives are over.”

ABC declined to comment on the criticism Saturday. Weinstein has consistently denied all accusations of non-consensual sex.

In the interview, Robach asks Rotunno if she’s been accused of being “a traitor to her own gender” by defending a man accused of raping women.

“I don’t believe I am. I think in many ways I would hope that I could help women. What happens in these circumstances where women don’t want to take certain responsibilities for their actions, we infantilize ourselves. You have to know that when you make certain choices, there’s a risk,” Rotunno replied.

Robach’s response was to point out that “a lot of people would say that what you just said is victim-blaming.”

Gloria Allred, who represents Weinstein’s accusers Annabella Sciorra and Mimi Haleyi, responded to Rotunno’s comments in a statement to TheWrap.

“I disagree with many of Donna Rotunno’s statements,” Allred said. “Many business meetings with producers of films have been conducted in hotel rooms. This statement by Ms. Rotunno appears to suggest that if a woman is asked to go to a hotel room, that it is her fault if she is raped. That defense did not work in the criminal case against Mike Tyson a number of years ago. He was convicted of raping a woman in a hotel room and I believe that this attempt to blame victims who are raped in hotel rooms will not be successful now in the era of the ‘Me Too Movement.'”

In the “Nightline” interview, Rotunno made a point to say that she is “not the moral police on Harvey Weinstein” and emphasized that “Harvey has a right to a defense… If [the jurors] look at the evidence that’s going to be presented to them, I think they’re going to find him not guilty.”

ABC News also quoted its chief legal analyst, Dan Abrams, in response to Rotunno’s claim that “going to a hotel room and having someone ask you if you’ll give them a massage is not rape, it’s not sexual assault, and it’s really not sexual harassment.”

“When someone in a position of power over someone else’s career makes the pass with the either explicit or implicit promise of career benefits, that is the definition of sexual harassment,” Abrams said.

“This segment displayed, to a national audience, the same dismissive, manipulative tactics Harvey implemented to silence the voices of so many women for decades,” the statement read (see it in full below). “We believe the evidence against Harvey presented in the trial next month will be a moment of reckoning and he will be held accountable for his crimes.”

Lou Godbold, a Weinstein accuser and trauma specialist who signed the Times Up statement, also weighed in on the segment.

“Harvey’s defense is that all men are rapists so that women should not find themselves alone with a man, despite the fact that it was a common practice for powerful men to take business meetings alone and in their hotel suites,” Goldbold said in a tweet.

“This lawyer did her client no favors with this interview,” Rosen tweeted Saturday. “Especially when she blamed the women for seeking jobs and when she struggled to suggest that #HarveyWeinstein had any remorse. Kudos to [Dan Abrams] for his clarity in explaning [sic] the issues in this case.”