I thought I wanted a boyfriend, but it turns out I just needed a new podcast to keep me company. #FalseAlarm. Rosanna Arquette’s new audio series “Radical Musings With Rosanna Arquette” from Audio Up is the perfect way to feel engaged and connected to life beyond the COVID bubble.

That’s right. Arquette, long known for her career as an actress, filmmaker and activist, has added ‘Podcast Host’ to her résumé, which already reads longer than a CVS receipt.

Luckily, the “Pulp Fiction” star had no issue adapting to her new life as a podcaster. “I really love interviewing people,” she told WrapWomen, reminiscing on the years she spent interviewing artists backstage at Coachella. “It’s a hobby and a passion so [the podcast] happened kind of naturally.”

Combining her love of music, connecting with the most creative thinkers of our time, “Radical Musings” features intimate chats and insightful interviews with today’s top newsmakers across politics, entertainment and social justice — starting with “Grace and Frankie” star and activist Jane Fonda in the first episode, which dropped on Feb. 1. 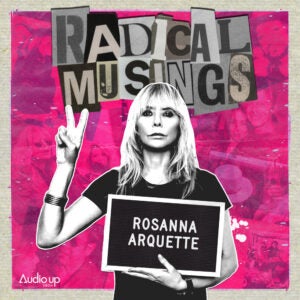 “It’s really just conversations with interesting people that do wonderful things,” Arquette said. “The podcast is intimate, fun and it makes you feel connected to the person. You get to know people for more than just a magazine cover or the role they play (on television),” she added. And she was right.

Prior to listening to the first episode, I had read about Fonda’s activism in the pages of Marie Claire. I had seen the photos of her protesting — and getting arrested — on Instagram. But, in my millennial mind, the actor still wore the name tag Grace from “Grace and Frankie.” However, my perspectives of Fonda quickly shifted about five minutes into the podcast as the two friends reminisced about the moment Fonda decided to move to Washington, D.C., to become a full-time activist. It goes something like this…

During a girl’s trip to Big Sur in 2019, Fonda was reading Naomi Klein’s book “On Fire: The Burning Case for a Green New Deal.” According to Arquette, you could tell immediately that Fonda was ready to jump aboard the climate justice train: “I could just see, she was like, ‘We have to do something!'”

A few weeks later, Fonda moved to Washington to camp out in front of the White House. The actor teamed up with Annie Leonard of Greenpeace and together they started Fire Drill Fridays, a weekly series of peaceful protests to raise awareness for the Green New Deal and climate justice. “That’s what (Fonda’s) always done. With everything she does,” Arquette told WrapWomen. “You know she walks the walk, she’s not just someone who’s saying it. She actually does it.”

Hearing Arquette and Fonda revisit their memories together during the podcast made it feel like I was sitting on the couch with them drinking coffee — or a martini, depending on the time of day. As I listened to Fonda talk about her career as an activist first-hand, she became a new person. She was no longer just JLo’s nemesis from “Monster in Law” or a face on a magazine, but rather an icon responsible for driving real change.

If you’re looking for a podcast where you can be entertained, feel connected and learn all at the same time, then Audio Up’s “Radical Musings with Rosanna Arquette” is the one for you.