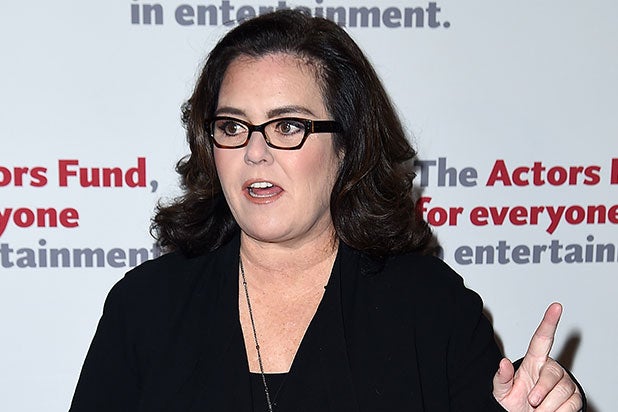 For once, Rosie O’Donnell has nothing to say. At least on the topic of Melania and Barron Trump.

O’Donnell, who drew heavy criticism this week for speculating that Melania Trump’s 10-year-old son Barron might be autistic, was mum on the topic when approached by a paparazzo at Los Angeles International Airport on Thursday.

“Clearly your comments were not malicious, right? That’s obvious. Do you have any comments to Melania, Barron, Donald himself?” the photographer asked O’Donnell in a video published by TMZ.

O’Donnell calmly deflected, opting to hit the photographer with a barrage of personal questions about himself.

“What’s your name?” O’Donnell asked, before questioning the paparazzo about his siblings and their age, his child and whether the photographer’s parents are still together.

After a lengthy run of family-oriented chit-chat, the photographer attempted to turn the conversation back to the Trump situation.

“There’s nothing you can say about Melania, Barron, Donald — any comments to them?” the photographer asked.

“No. but I’m really interested in your family. You’re the middle of seven children, your parents are still together, and some of your siblings don’t get along,” O’Donnell replied.

Watch O’Donnell get dodgy with the Trump issue here.

“The View” alum found herself in hot water after re-tweeting a YouTube video suggesting that Barron Trump might have autism.

“Barron Trump Autistic?” O’Donnell wrote in her re-tweet of the video, which has since been taken down. “If so — what an amazing opportunity to bring attention to the AUTISM epidemic.”

Later, O’Donnell defended the speculation, writing that her daughter was recently diagnosed with the condition.

“Here is how it went down,” O’Donnell wrote. “My 3.5 year old daughter Dakota was diagnosed in September with HFA — high functioning autism. I have been immersed in that world/reality since learning — reading — asking questions. It’s all autism — all the time for the newly diagnosed. As we try to grab onto anything to keep us standing, the knowledge we r not alone there r others living this too.”

On Thursday, O’Donnell apologized to Melania Trump via Twitter, writing, “I apologize to @MELANIATRUMP – i was insensitive in my RT – i am sorry for the pain i caused – it was not my intent – i am truly sorry,” O’Donnell wrote.