Even if he’s not selling, Rupert Murdoch is still cashing in on the rumors that certain 21st Century Fox assets are on the auction block. Dude’s fortune rose nearly $600 million on Friday for doing nothing — how much did you make today?

Doing a little math, that means Rupert Murdoch made more than $585.1 million today. Yeah, he’s gonna have a better weekend than you.

Here’s a snapshot of the company’s trading week. That totally vertical line is today’s open. 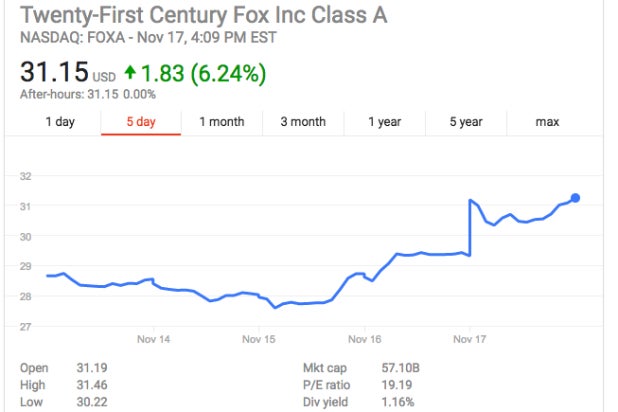 Most recently, Comcast has discussed a potential acquisition of 21st Century Fox, according to a Thursday report from CNBC.

The deal appears to be along similar parameters as talks recently held between Disney and Fox, in which the Mouse House would have acquired Fox’s TV and film production business and several cable channels. Like Disney, which owns ABC, NBC owner Comcast is not allowed to own two broadcast networks.

Also, any acquisition of Fox assets by a fellow media giant would not include Fox News or Fox Sports due to antitrust issues.