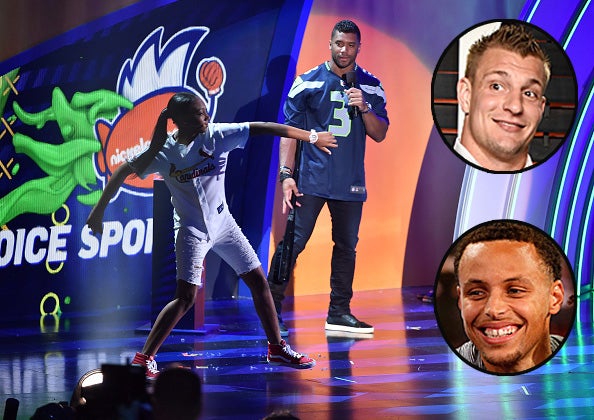 Before returning to the field to lead the Seattle Seahawks perhaps to a third Super Bowl, quarterback Russell Wilson will reprise another winning role.

Wilson is set to host Nickelodeon’s “Kids’ Choice Sports 2016” awards for the second time in a row (just like his consecutive Super Bowl appearances), the QB announced on his Instagram page Wednesday.

“I’ve got some big news!” the Super Bowl XLVIII champion told fans in an exuberant video while eating a “hearty” breakfast before football practice. “I’m coming back! Millions of millions of kids, it’s going to be so much fun.”

Currently focused on trying to win a second NBA championship, Curry dominated the pack this year with three nominations defending his titles for “Best Male Athlete,” “Clutch Player of the Year” and “Sickest Moves.”

Before becoming the “King of Slime” last year, Wilson told TheWrap that he wasn’t nervous about the job. “I’ve always wanted to host a show. … I’ve never hosted anything like this before but I’ve played in front of a lot of people so I’m not nervous,” he said.

“Kids’ Choice Sports 2016” is the only show that celebrates children and families’ love of sports and top professional athletes.

Online voting begins Monday, May 23, on Nick.com and the Nick App.

Nickelodeon’s “Kids’ Choice Sports 2016” will be taped live from UCLA’s Pauley Pavilion in Los Angeles on Thursday, July 14, and premieres on Sunday, July 17, at 8 p.m. ET/PT.

Of course, Wilson isn’t the only NFL player to have a show on Nickelodeon this summer.

“Crashletes” will feature guest personalities from the worlds of sports and entertainment, along with the funniest, craziest viral sports clips and user-generated content from around the world, according to the network. As host, Gronkowski will offer funny commentary on the clips, alongside his co-hosts and guest stars.