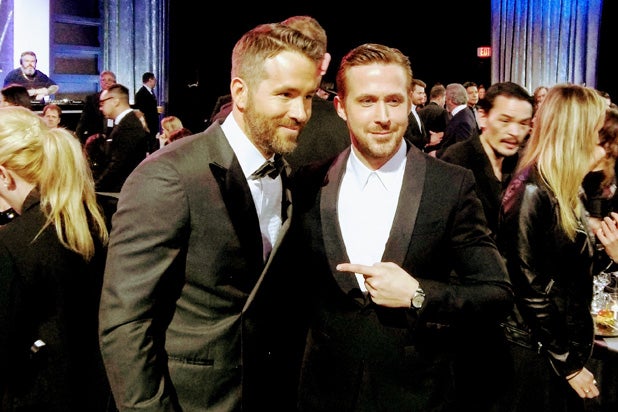 Ryan Gosling and Ryan Reynolds turned heads when they were photographed during a commercial break at the 22nd Critics’ Choice Awards at the Barker Hangar in Santa Monica on Sunday.

The Canadians-turned-Hollywood heavyweights were each nominated for Best Comedy Actor, but Reynolds took the award for “Deadpool.” When the duo got together for a quick chat and photo session during a commercial break, photographers inside the posh event hustled to snap the perfect shot.

Buzzfeed wrote that “our Ryan dreams came true,” while many fans took to Twitter to thank Canada for the moment. It wasn’t just fans who got excited by the duo — it was also the media covering the event. Check out some of the best reactions to the bromance:

Ryan Reynolds and Ryan Gosling pose together at the #CriticsChoice awards and we (almost) can't handle it! https://t.co/Xch9uJbJKk pic.twitter.com/izOwoB0PKf

Presenting several very important photos of Ryan Gosling and Ryan Reynolds pointing at each other https://t.co/nYoNRdPbiY

Gosling rocked a tie-less look, while Reynolds wore a traditional black bow tie. Curiously, neither opted for a Canadian tuxedo.

Eventually, Reynolds made an emotional speech after also winning the Entertainer of the Year award, dedicating the victory to the Make-a-Wish foundation and the Sick Kids Foundation of Toronto.

“Two incredible organizations who do so much for so many kids in need,” he said.

It was a big night for Reynolds, who also dedicated the award to two particular cancer victims, Connor McGrath and Grace Bowen.

“They didn’t lose the battle, they started a fight and it’s up to us to finish it,” the “Deadpool” star said.