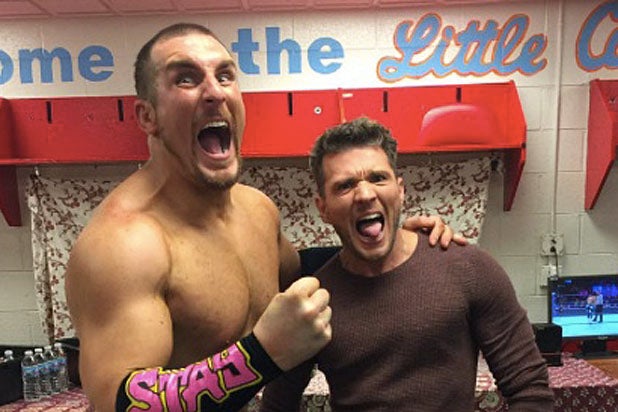 Stranger things have happened, and the “Shooter” star already has his tag team partner picked out if he decides to take a break from acting to become a wrestler.

Phillippe was the latest Hollywood star to be a guest on WWE’s “SmackDown Live” Tuesday, and he made instant buddies with the most hyped man in town, Mojo Rawley.

The pair shot a skit backstage in which Phillippe was looking for Randy Orton, who recently guest starred on his USA Network drama.

“Randy is a bit of different dude these days than when he was on the show ‘Shooter,'” Mojo warns him, only to be rudely interrupted by his upcoming opponent, Curt Hawkins.

Hawkins tries — and fails — to trash talk by confusing Phillippe with Mark Wahlberg, who starred in the 2007 theatrical version of “Shooter” and is an executive producer on the series. He did drop a pretty sweet “Cruel Intentions” joke though, so we’ll give him props for that.

Phillippe was sat ringside with the “SmackDown” commentators relishing his new bromance when Mojo later dominated Hawkins with a brutal tackle to take him down — and to win his first solo match since his Hype Bros. tag team partner, Zack Ryder, injured his knee last week.

Afterward, Phillippe jumped up on the ropes to celebrate Mojo’s victory and proved he’s pretty good at hamming it up WWE-style himself.

Also Read: Ronda Rousey to WWE? 'We Would Love to Have Her,' Stephanie McMahon Says

Actors have an impressive success rate in the WWE — and Mojo needs a new tag team partner. Could this be a match made in neon Zubaz-striped heaven?

See the videos of Phillippe’s WWE escapades in the tweets below.

.@MojoRawleyWWE finds the power of the PUNCH for the victory over @TheCurtHawkins. #FACT! #SDLive pic.twitter.com/AFoHRiUZ9n

Hey @RyanPhillippe!!! Big win tonight my friend! But the night ain't over!!! It's time to go out and hit the town! @WWE #SDLive pic.twitter.com/ik8FfbjpVr