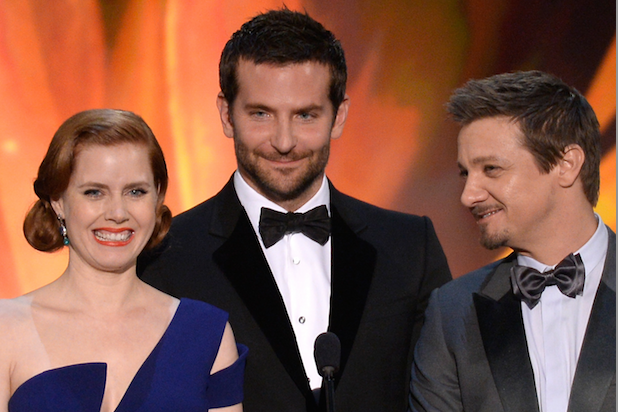 It was the fourth consecutive win for the cast of the ABC sitcom about a multi-generational clan living in Southern California, and the first win for the AMC drama about a chemistry teacher turned meth dealer.

The annual awards show honors the best of film and television acting, and guild members spread out hardware among a wide variety of pictures and shows. The only film to earn more than one statue was “Dallas Buyers Club,” which picked up outstanding actor and outstanding supporting actor honors for stars Matthew McConaughey and Jared Leto.

“Breaking Bad,” which ended its five season run last fall, was the only show to win more than one category, also nabbing a statue for star Bryan Cranston.

McConaughey beat out the likes of “Nebraska’s” Bruce Dern and “12 Years a Slave’s” Chiwetel Ejiofor for his role as a homophobic AIDS activist in “Dallas Buyers Club.” The actor said acting was a “bull ride” and acknowledged that he had devoted himself more fully to his craft in recent years. Roles like “Dallas Buyers Club’s” Ron Woodruff or his parts in acclaimed films such as “Mud” and “Magic Mike,” have allowed him to “…humble myself to their humanities and then get feverishly drunk on their obsessions,” McConaughey said.

Cate Blanchett also continued her strong award season showing this year, earning an outstanding actress honor for her role as a demented former trophy wife in “Blue Jasmine.” It was a return to film, Blanchett noted, after several years spent concentrating on theater roles in her native Australia.

“Matthew McConaughey spoke about Neptune,” she joked, when she got a wrap up sign early into her acceptance speech.

“For those that voted for me, I thank you and for those that didn’t, better luck next year,” she added, wrapping up her remarks by thanking writer and director Woody Allen for his legacy of crafting strong female roles.

The SAG Awards are considered to be a reliable predictor of a performer’s Oscar chances, because the guild and the Academy of Motion Picture Arts and Sciences have a great deal of overlap in their membership. Indeed, the Academy’s acting branch is one of its largest voting bodies, so a strong showing at SAG is often a sign of a front-runner emerging in a particular race.

Yet, there are deviations. Tom Hanks and Oprah Winfrey, for instance, both were singled out by SAG voters for their performances in “Captain Phillips” and “Lee Daniels’ The Butler” only to come up short when Oscar nominations were announced last Thursday.

Leto took his moment at the podium to pay tribute to “all of the people who have lost their lives” to AIDS and to James Gandolfini, who was nominated for his work in “Enough Said.”

In an emotional speech, Nyong’o thanked Solomon Northup, the real-life inspiration for the movie, for a “life well lived” and also honored her director Steve McQueen for “shining a spotlight” on a painful chapter of American history.

Nyong’o’s victory marked the historical drama’s only award of the evening. It could mean that she has passed ahead of “American Hustle’s” Jennifer Lawrence, who earned a Golden Globe award last weekend for playing a New Jersey housewife, in the hunt for an Oscar.

Perhaps the most hilarious acceptance speech of the evening belonged to Julia Louis-Dreyfus, who won outstanding female actor in a comedy series for her role as a hapless vice president in “Veep.”  She used her win as the opportunity for a comic bit that found the HBO star take the stage flanked by co-star Matt Walsh, who plays her assistant on the show. He pretended to give her several incorrect speeches.

“I’d like to begin by thanking the members of the Hollywood Foreign Press for this Golden Globe,” Louis-Dreyfus said, going on to say it was an honor to be nominated for an Oscar.

Ty Burrell earned an outstanding male actor in a comedy statue for playing a goofy father in “Modern Family,” joking that he was certain everyone in the union had read his book, “Acting How to Do it Good.”

A record-setting streak came to a close with Burrell’s win as it finally ended Alec Baldwin’s seven consecutive victories for “30 Rock” in the category. With his streak ending and “30 Rock” losing the comedy-ensemble award to “Modern Family,” Baldwin missed an opportunity to break a tie with Julianna Margulies and become the winningest actor in SAG Awards history.

“I’ve had so many crappy jobs,” Cranston said, noting he once loaded trucks and was sustained by dreams of an acting career.

“We are the luckiest people in the world who can say, ‘I am an actor,'” he added.

Helen Mirren picked up her fifth SAG award, this one coming in the outstanding actress in a TV movie or mini-series, for portraying a defense attorney in HBO’s “Phil Spector.”

“I don’t feel at all saggy, I feel quite perky,” she joked, confessing she had expected the award to go to “Top of the Lake’s” Elisabeth Moss.

Michael Douglas added a SAG award to an awards haul that has included an Emmy and Golden Globe for his portrayal of Liberace in “Behind the Candelabra.” The veteran actor had kind words for his co-star, who he noted had stayed on the project even though Douglas’ cancer battle delayed filming.

“I know we’ve gone head to head,” he joked. “But the truth is I’m not here without Matt Damon.”

In addition to the competitive honors, SAG presented its lifetime achievement award to Rita Moreno. The “West Side Story” actress won a Best Supporting Actress Oscar for her role in the musical classic and also has two Emmys, a Tony and a Grammy in her trophy chest.

“Hopefully it’s early in the third act of my life,” the 82-year old actress said.

The awards were broadcast from  L.A.’s Shrine Exposition Center. Prior to the show, SAG announced that its honors for best stunt ensembles had gone to “Lone Survivor” and “Game of Thrones.”