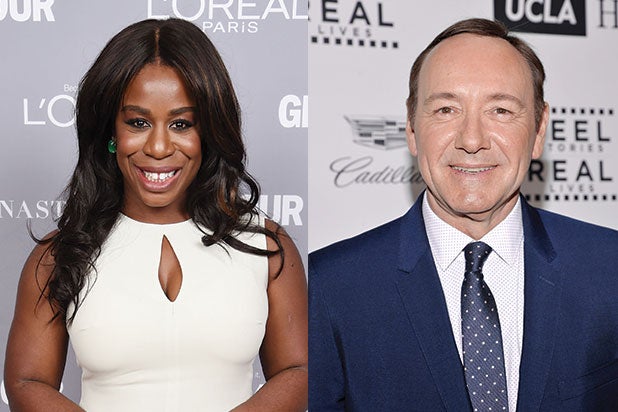 The nominees for the 2016 SAG Awards were announced early Wednesday, and honored actors and actresses expressed their disbelief and gratitude in the hours following.

“What the?! I woke up early for my yearly thank you to Svein but now I’m hearing I was nominated for a @SAGAwards!! What a morning!!” “Room” actress Brie Larson wrote.

Anna Faris (“Mom”) and Anthony Mackie (“The Night Before”) led the announcements.

See the reaction statements and tweets below.

“To be recognized by your peers is one of the greatest honors an actor can receive. We were a team, and everyone involved with this project deserves to share in this nomination. Making ‘The Revenant’ was an incredible experience, and throughout my career I have had the privilege of working with some of the most talented directors and actors. I never miss an opportunity to learn from those I have been fortunate to work with, and this was no exception. We are all thankful to Alejandro for letting us be a part of this unique and unforgettable cinematic experience. Thank you SAG-AFTRA.”

“It means a great deal to be recognised by my peers during such a wonderful year of filmmaking. ‘The Danish Girl’ took a long while to get made and I am damn lucky that I ended up having the honour of helping bring Lili and Gerda’s story to the screen. I am hugely grateful to Tom Hooper, Alicia Vikander, and our incredible cast for this truly unique collaboration. I certainly wouldn’t have been able to play Lili were it not for the generosity of the trans women and men who helped me prepare for this role; I am indebted to all of them and the community. My thanks to SAG-AFTRA members for this nomination.”

Helen Mirren, “The Woman in Gold” and “Trumbo:”

“Thank you fellow rogues and vagabonds. Once is an honour, twice is surprising, three times is a miracle. I know they are called the SAG awards but I feel very perky today.”

“This film has been such a wonderful and personal journey. I think it hits so close to home for many people, making the incredible response so special.  I’m honored to be nominated by SAG not only because they are my peers, but also because I’m overwhelmed to be recognized alongside actors whose work I admire so much. I’ve been lucky enough to be a working actor for almost 10 years and the mere fact that people can finally pronounce my name is pretty exciting! I share this with the whole ‘Brooklyn’ family.”

Idris Elba, “Beasts of No Nation:”

“Wow I’m just floored and humbled right now.  It’s such a huge honor to be recognized by my friends and peers and for two projects that have really been such an important part of my life, ‘Luther’ and ‘Beasts of No Nation.’  It goes without saying that my performance is shared with the tremendous actors I work with. Congratulations to Abraham Attah, Kurt Egyiawan and the rest of the amazing cast from BEASTS!”

“It’s such an honor to be nominated by my peers. This movie was a labor of love and being recognized for my performance as Bessie Smith is really incredible.”

“This makes me very very happy. I am truly thrilled to be nominated for a SAG award this year.”

“I am thrilled to be nominated by my fellow actors, and I give all credit to Mckean, Banks, Seahorn, and the amazing cast around me, raising my game. Thanks!”

“I am celebrating my SAG nomination with my family in Dubai. We’re having ice cream sundaes tonight! Everything about ROOM was amazing, especially working with Brie and becoming best buddies. I can’t believe it, so cool!”

Brie Larson, “Room:”
“Screen Actors Guild…thank you!! I’m so overwhelmed with happiness. This is a HUGE honor, made even more special because I’ll get to share the evening with Jacob. Best date EVER!”
Edie Falco, “Nurse Jackie:”
“There are so many exciting new actors working lately on groundbreaking new shows; it’s thrilling to be included in the mix.”

So excited & thrilled for our happy group of idiot actors @VeepHBO – Thanks @SAGawards !

To my better half on #HouseofCards Congrats @RealRobinWright for #sagawardsnoms & everyone at #HOC for Best Ensemble! @SAGawards @netflix K????

Congrats to my fellow nominees in Best Actor category and thanks to the SAG membership for my nomination! #sagawardsnoms @SAGawards K????

What the?! I woke up early for my yearly thank you to Svein but now I'm hearing I was nominated for a @SAGAwards!! What a morning!!

Thank you @SAGawards for recognizing the cast of @OITNB & myself with this nomination. Means so much to us to tell this story. #TeamOrange

Congrats to the cast of @OITNB for our #sagawardsnoms for outstanding ensemble in a comedy series. Thanks to our fellow actors for the nod

We've been nominated! Thanks to @SAGawards for recognizing the cast of Orange Is the New Black. #OITNB #SAGAwards https://t.co/Z0eNEgj4G9

Congrats to my #OITNB family on another #SAGAwards nomination for Best Ensemble in a Comedy. Truly well deserved. You guys are legends!!!