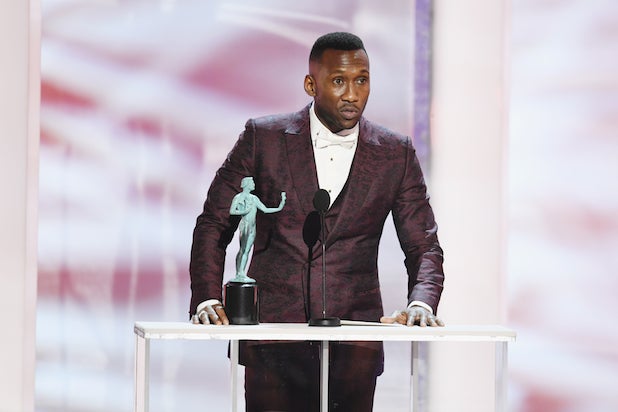 The 25th Screen Actors Guild Awards aired live on both TBS and TNT on Sunday night, and while millions of viewers watched “Will & Grace” star Megan Mullally host the event, TheWrap was backstage at the Shrine Auditorium in Los Angeles getting an inside look at the winners’ reactions.

The full list of winners can be found here, but check out what you didn’t see on TV below.

Mahershala Ali has a simple request for “Green Book” critics
When asked about “Green Book” and the ongoing criticism of its historical accuracy after winning the award for Best Male Actor in a Supporting Role in a Motion Picture, Mahershala Ali told the press backstage that he wishes people would read more about his character’s story before making a final judgment.

“I need people to go back and see what Dr. Shirley had to say for himself,” Ali said of portraying the accomplished black jazz pianist and composer. “I feel like my job is always the same. My job is to make sure that my work is as deep as possible and I am committed to my character as possible.” Dr. Shirley’s brother and nephew have come out against the depiction of Ali’s character, with brother Maurice Shirley calling it “a symphony of lies” in an interview with outlet Shadow and Act in December.

Darren Criss’ beer and burger diet
Most stars have to lose weight for roles, but Darren Criss — who won for Best Male Actor in a TV Movie/Limited Series — revealed the opposite problem, as he talked about how FX’s “The Assassination of Gianni Versace: American Crime Story” tried to accurately portray character Andrew Cunanan’s varying dramatic physical changes over the period that the story is told.

“There was no way were going to pull [the weight gains] off. There was a week when we thought we were. I probably had four cheeseburgers and three beers a day that week,” Criss said.

Even Chadwick Boseman didn’t think “Black Panther” would win …
One of the biggest surprises of the night was that “Black Panther” won Best Cast in a Motion Picture. “Well, I’ll be … I didn’t think I was going to have to speak,” Chadwick Boseman said live onstage as the cast accepted the award. But even if he didn’t prepare anything, Boseman would follow with an impassioned speech about what it means “to be young, gifted and black” in today’s America.

Backstage, Boseman offered an expanded version of his speech, including that he drew inspiration from Nina Simone’s poetic song “To Be Young, Gifted and Black.”

“I love that song. It speaks to the fact that you have the same dreams as other people. You have the same talent at times, but you don’t have the same opportunities,” he said. “The same nepotism and resources that can be put toward your dreams. Sometimes you don’t have family members that have achieved what you want to do. To be young, gifted and black is all of that. It’s to have everything, but then not quite be able to grasp it. And then to persevere through that.”

The cast also addressed the possibility of a “Black Panther” sequel. “I think everybody would be pretty excited to come back around,” Michael B. Jordan said.

Rami Malek on how perseverance led to his success
While it may not look like he’s struggling now having been named Best Male Actor in a Motion Picture for “Bohemian Rhapsody,” Rami Malek fought his way up in the competitive entertainment industry.

“If you can find a way to get your headshot and resume in front of the right people, that would be the impetus to get a job,” Malek remembers casting director Mali Finn telling him early on in his career.

Malek said he took her advice, which led him to be cast in “Gilmore Girls” in 2004.

Sandra Oh embraces her sinister side
Sandra Oh had darker advice – literally – for aspiring actors after winning the SAG Award for Best Female Actor in a Drama Series. When she was asked what people can learn from “Killing Eve,” Oh said, “embrace your own darkness and shadow. If you don’t make space for it, it will come destroy you.”

“Marvelous Mrs. Maisel” share the love with the media
The cast of “The Marvelous Mrs. Maisel” had fun with the press after sweeping the TV comedy categories. As the cast started coming in, actors Marine Hinkle (Miriam’s mom Rose) and Kevin Pollak (Joel Maisel’s dad Moishe) went around to reporters and asked them to hold their trophies, noticing how heavy they were.

“Would you like to hold it?” Pollack told one media member. “Take a number.”