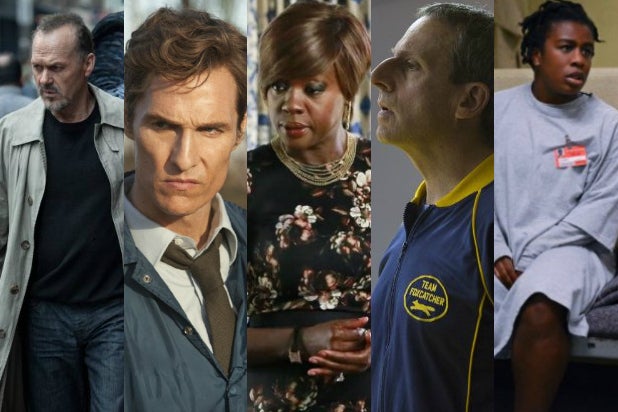 The nominees for the 21st annual Screen Actors Guild Awards were announced Wednesday morning on TBS and TNT by Eva Longoria and Ansel Elgort.

In the film field, “Birdman” finished first with four nods, while “The Imitation Game” and “The Theory of Everything” landed three apiece. Those three, plus “The Grand Budapest Hotel” and “Boyhood” are finalists in the movie ensemble category.

As far as the small screen goes, “Modern Family” grabbed four nominations, as “Homeland,” “Game of Thrones,” “House of Cards” and “Boardwalk Empire” each had three.

Also read: SAG Nominations As Expected, With a Side of Odd and Squirrely

See video: Jennifer Aniston on Why She Fought for 'Cake', Deglamorization of Women for Awards; Picks Proudest Roles (Video)

Outstanding Action Performance by a Stunt Ensemble in a Motion Picture
“Fury”
“Get On Up”
“The Hobbit: The Battle of the Five Armies”
“Unbroken”
“X-Men: Days of Future Past”

Outstanding Action Performance by a Stunt Ensemble in a Comedy or Drama Series
“24: Live Another Day”
“Boardwalk Empire”
“Game of Thrones”
“Homeland”
“Sons of Anarchy”
“The Walking Dead”