"Complaints from consumers about acting and modeling scams have doubled every year since 2006," Krekorian said. "These scams financially and psychologically hurt Californians because state law was inadequate to properly deal with disreputable talent scouts." 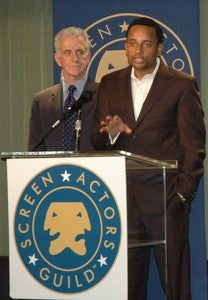 SAG National President Ken Howard said, "AB 1319 is an example of how we can protect innocent, well-intentioned people from paying for goods that no person or entity can promise or deliver. The promise of acting jobs is no longer for sale.

"Screen Actors Guild has a long history of protecting children," Howard added. "In fact, since our founding members organized SAG in 1933, our union has helped create numerous laws and bargained critical contract provisions designed solely to protect children’s income, education, and most of all, their safety and well-being."

SAG national board member Hill Harper (left, with Krekorian) said, “Unfortunately we live in a time where people who have malicious intent are using more and more sophisticated means to take advantage of the people who can protect themselves the least. And legislation like this represents, I believe, the beginning of dealing with this.”

Anne Henry, founder of the advocacy group BizParentz Foundation, said, “We’re hoping that this bill will cut through for our organization the huge burden that this has become. We’ve seen literally thousands of complaints.”