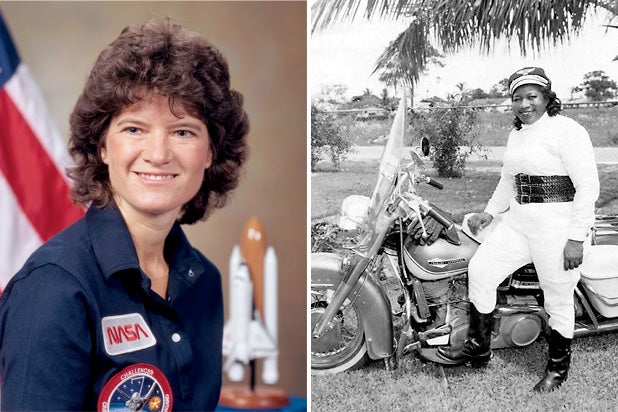 Who wants to go first? Everyone sits there quietly. Most of us are intrigued but terrified actually to be the first. Why are so many of us afraid of the unknown and the uncharted?

Sally Ride nailed it when she said, “You can’t be what you can’t see.” Thank you, Sally Ride. Young girls in the ’80s needed to see the first American woman go to space. I certainly needed it. I didn’t become an astronaut, but knowing that Sally Ride existed did add fuel to my courage to brave the unknown.

Female pioneers like Sally Ride who dared to be the first are critical to our human evolution. Let us not forget that the second, third and fourth are just as vital. We must never let our path toward equality remain less traveled. The notion that women are not equal to men is preposterous, yet women all over the world are still unjustly marginalized.

Who is to blame? Oh, where to start? Let’s go back to the question, “Who wants to go first?” I doubt that any pioneer waited for someone to ask them to be the first. Just like no one invited me to write my first screenplay. I know. That doesn’t seem nearly as important as flying into space.

I’m also not the first or even the fourth first-generation American, daughter of Mexican immigrants, to embark on this endeavor. My childhood self told me I’d have a novel written by the age of 18. There I was, 12 years later with nada, nothing! Oh, wait. Revelation. No one is going to ask me to go first. Especially when women only account for 13 percent of screenwriters.

I’d have to take that step on my own. Saying this to myself was much easier than doing it. So I resisted, avoided and delayed writing my long-overdue screenplay. I let the unknown remain unknown. It wasn’t until someone much braver than I came into my life, that I finally took that first step. Her name is Bessie B. Stringfield.

When I discovered Bessie’s biography on the American Motorcycle Association Motorcycle Hall of Fame website and eventually in Ann Ferrar’s motorcycle anthology, “Hear Me Roar: Women, Motorcycles and the Rapture of the Road,” I was enraptured by her.

According to the American Motorcycle Association and interviews conducted by Ferrar, Bessie was born in 1911, to a Jamaican father and white Dutch mother. She was orphaned and adopted by a kind and wealthy white Irish Catholic woman, who raised her in a white neighborhood of Boston.

Despite having a supportive adoptive mother, Bessie was denied full membership in the black community and the white community because she was mixed, orphaned, and a trans-racial adoptee. “I spent most of my life alone, lookin’ for a family,” Bessie says in Ferrar’s book. “I found my family in motorcycling.”

Wait, what? Motorcycling? Despite the fact that Bessie had a life marked by racial and gender exclusion, barriers, and discrimination, she became the first woman of color (posthumously) inducted into the American Motorcycle Association Motorcycle Hall of Fame.

Thank you, Bessie, for not accepting those limitations or denying yourself the right to pursue happiness. Thank you for daring to be who you wanted to be. Bessie’s story shook me to my core. She reminded me that we have not come as far as we need in our fight for equality.

Can you imagine how many more incredible firsts, seconds, thirds and fourths there would be if women were no longer marginalized? I can. So, let’s not wait for anyone to ask us to go first. Let’s storm into the unknown, fill those gaps, tell our stories and continue to take those first steps.

Bessie did it. Sally did it. I did it. You can do it. We can do it together.

View In Gallery
BIO Paloma M. Riojas
Paloma M. Riojas is a writer/producer with an MFA in Film/TV Production from the USC School of Cinematic Arts. She currently has a one-hour series and feature film script in development. She also continues to collaborate with filmmaker Diego Luna as a creative development executive through his company Canana.

Paloma M. Riojas is a writer/producer with an MFA in Film/TV Production from the USC School of Cinematic Arts. She currently has a one-hour series and feature film script in development. She also continues to collaborate with filmmaker Diego Luna as a creative development executive through his company Canana.