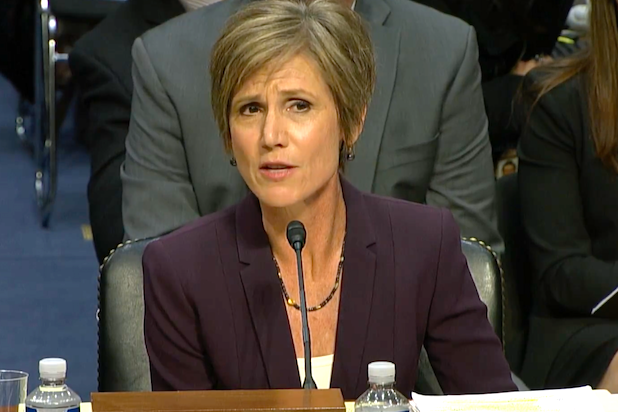 Former acting Attorney General Sally Yates testified Monday that she told the White House in no uncertain terms that former national security adviser Michael Flynn was at risk of being blackmailed by Russia after giving false statements about his conversations with the Russian ambassador to the media.

“General Flynn was compromised in regard to the Russians,” Yates said.

Yates said that Flynn’s behavior was “problematic” and that he could be “essentially blackmailed by the Russians.”

Yates, who testified along with with former Director of National Intelligence James Clapper, did not go into specifics, insisting that the details were classified, but she basically confirmed the flurry of media reports that brought about the dismissal of Flynn in February.

Those reports claimed that Flynn had misled his bosses about his conversation with Russian Ambassador to the U.S. Sergey Kislyak prior to Trump’s inauguration, telling them he had not discussed any Obama administration sanctions against Russia when he in fact did.

Also Read: Irony: Jeff Sessions Once Told Sally Yates to Stand Up to the President (Video)

On Jan. 26, Yates told White House Counsel Donald McGahn that Flynn was vulnerable to blackmail because Russia knew that he had been untruthful with the administration.

“We were concerned that the American people had been misled about the underlying conduct and what General Flynn had done,” Yates told a Senate Judiciary subcommittee.

Yates also testified that McGahn asked her why it would matter to the Department of Justice if a White House official lied to another official? Yates said that she explained the American people were being misled, and that the Russians knew that.

Asked whether the administration  took her warning seriously, given that Flynn held on to his job for another 18 days after Yates met with the White House, Yates said: “Mr. McGahn certainly demonstrated that he understood that this was serious,” Yates said of her meetings with the White House counsel. “I don’t have any way of knowing what if anything they did. If nothing was done than certainly that would be concerning.”

Yates became a household name after she broke with President Donald Trump over his travel ban, a move that led to her firing in January. In January, she informed the administration that then-National Security Adviser Michale Flynn may have misled officials about conversations.

Monday’s hearing was the first time Yates spoke publicly about her warnings to the White House, which the administration has since played down. White House officials have described Yates’ warning as merely a “heads-up” about Flynn’s Russian contacts.

Hours before Yates was set to testify, NBC News reported that former Obama officials said that former President Barack Obama warned Trump against hiring Flynn in a meeting in the Oval Office on November 10.

But Trump dismissed the reports tweeting that the Obama administration had granted Flynn “the highest security clearance.”

Flynn was given security clearance while he served as the head of the Pentagon’s Defense Intelligence Agency in the Obama administration in 2012. But he was fired in 2014.

Just three weeks into his job as national security advisor, Flynn was fired for misleading Vice President Pence about those conversations he had with Ambassador Kislyak.

General Flynn was given the highest security clearance by the Obama Administration – but the Fake News seldom likes talking about that.