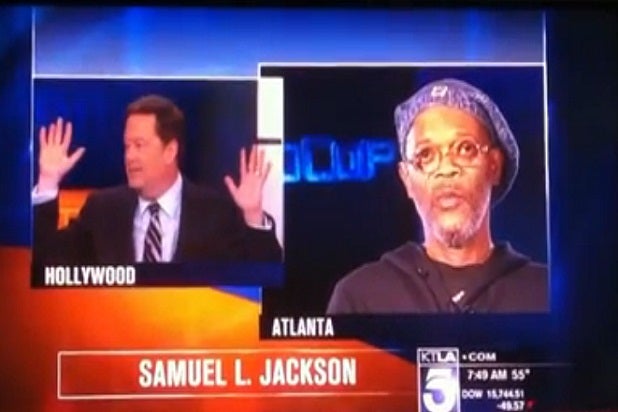 Samuel L. Jackson has never been one to hold his tongue, and a recent interview with Sam Rubin was no exception, after the longtime KTLA entertainment reporter mistook the “Robocop” actor for Laurence Fishburne.

Jackson was ostensibly doing the interview with the Los Angeles station to promote the upcoming “RoboCop” remake — a topic that took a back seat after the station’s Rubin seemed to confuse him with “The Matrix” star.

Also read: Samuel L. Jackson on Obama: ‘Be a Leader. Be F—king Presidential’

“Did you get a lot of reaction from that Super Bowl commercial?” Rubin asked, an apparent reference to Fishburne’s “Matrix”-themed ad on big game day.

“What Super Bowl commercial?” a perplexed Jackson asked before putting two and two together.

“You’re as crazy as the people on Twitter!” Jackson shot back, in what might be one of the cruelest insults to be hurled in this age of social media. “I’m not Laurence Fishburne!

“I am guilty!” Rubin replied, in an attempt to put an end to the issue, but no dice, as Jackson continued to lay into him.

“You’re the entertainment reporter for this station and you don’t know the difference between me and Laurence Fishburne?” Jackson asked. “There must be a very short line for your job.”

Rubin later apologized, calling his gaffe a “very amateur mistake” and insisting that he does, in fact, know who Samuel L. Jackson is.

“First and foremost, I do know who Samuel L. Jackson is,” Rubin said on air. “I pride myself on the fact that, unlike a lot of people who do this kind of work, more often than not, I really do know what I’m talking about but I didn’t 30 minutes ago. And I’m really embarrassed about it, and I very much apologize to Samuel L. Jackson and anyone else who was offended by what was a very amateur mistake.”

Watch Rubin’s boo-boo and his subsequent apology below.