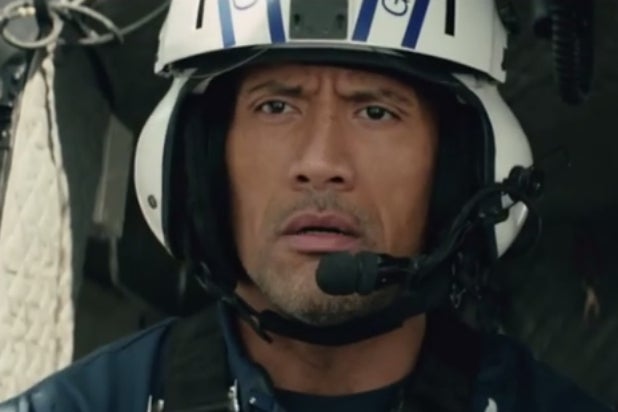 When the big one hits California, the Golden State will need a hero — it’ll need Dwayne “The Rock” Johnson.

In the new ominous trailer for upcoming earthquake disaster film “San Andreas,” Johnson’s Ray saves Carla Gugino‘s Emma and others by helicopter and by boat, among the more traditional measures of running, swimming and generally being a brawny lionheart.

But the on-again/off-again pro wrestler is not alone in his character’s quest to save the great state Hollywood calls home, and ultimately the entirety of America: Paul Giamatti adds brains to Johnson’s muscle in the movie.

“People need to know that the shaking is not over. We’ll get hit again, and it’s going to be a bigger monster,” he warns. “The earth will literally crack open, and you will feel it on the east coast.”

“I cannot emphasize this enough. You need to get out, and I mean now,” Giamatti’s character continues. “If you can’t, God be with you.”

Directed by Brad Peyton and produced by Warner Bros., Village Roadshow, and New Line Cinema, “San Andreas” rumbles into theaters on May 29.