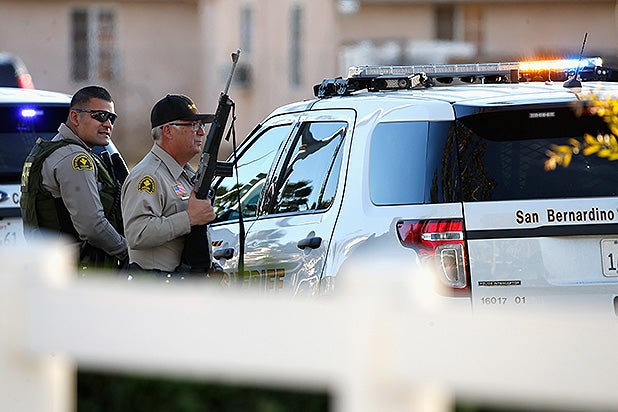 The deadly shooting rampage Wednesday in San Bernardino, California, has been declared as an act of terrorism, authorities said in a press conference Friday.

David Bowdich, assistant director for the FBI’s Los Angeles office, told the media that there were “a number of pieces of evidence” that led the investigation in that direction.

“A number of pieces of evidence … have essentially pushed us off the cliff to say that we are now investigating this as an act of terrorism,” Bowdich said.

He added that there were “telephonic conversations” between at least one of the suspects and others under investigation in the U.S., and that the FBI is working with its foreign partners to determine whether there overseas telephonic communications.

Questioned on whether the suspects — Syed Farook and Tashfeen Malik — had ties to ISIS, Bowdich cautioned: “I think you’re taking a leap; we’re not there.”

When asked if the suspects were planning a second attack, Bowdich said, “I don’t want to speculate; it’s certainly a possibility that we’re looking at.”

Prior to the shooting, Farook, 28, and Malik, 27, flew under authorities’ radar, a fact that Bowdich admitted “concerned” him. However, he added, “There’s nothing we’ve seen yet that would have triggered us to know.”

“We’re not aware of any other threat in the U.S. at this time,” he said.

The shooting at the Inland Regional Center in San Bernardino left 14 dead and 21 injured. Farook and Malik were killed hours later in a shootout with police approximately a mile from the initial shooting.