Jesse James has turned to an Arizona rehab facility. Sandra Bullock should turn to Debbie Reynolds.

As Bullock must eventually decide her next steps, professionally and personally, she’s got a great role model in another woman who once wore the same mantle of America’s Sweetheart – and was publicly humiliated by an unfaithful spouse. 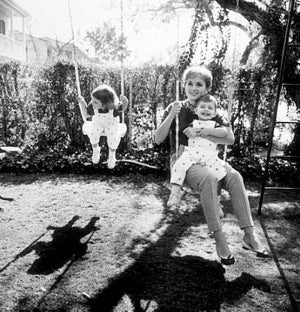 Truth is, Bullock’s joined a pretty big sorority. Hollywood has never lacked for actresses who’ve been cheated on, jilted or dumped.

Sienna Miller broke her engagement to Jude Law after he was caught pants-down with his kids’ nanny. Minnie Driver supposedly learned Matt Damon was ending their relationship by hearing it on Oprah. Laura Dern and, more famously, Jennifer Aniston lost their significant others to Angelina Jolie on film shoots.

And this isn’t a heterosexual thing: Ellen DeGeneres had to face Anne Heche leaving her for a cameraman.

But Reynolds comes to mind most of all.

For those not old enough to recall the famous Hollywood scandal, the star of “Singin’ in the Rain” was ranked one of the top 10 box-office stars in 1958 and the happy mother of two when her husband, singing idol Eddie Fisher, abruptly left her for their best friend, Elizabeth Taylor — the Jolie of her day. Reynolds was universally beloved for being a versatile, spunky, straight-talking celebrity, and she immediately won the public sympathy vote in the break-up, while Fisher and Taylor were vilified.

As news broke about her husband publicly romancing the notorious sex symbol, Reynolds provided a legendary photo op outside her Beverly Hills home. Holding her 18-month-old daughter Carrie Fisher and 6-month-old son Todd while wearing jeans, a man’s shirt and a kerchief on her head, she looked like she’d just stepped away from dusting. 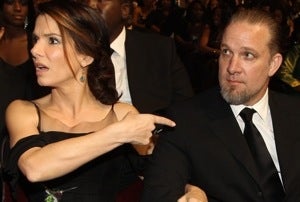 The photo remains an iconic image of a wronged woman, alongside the picture of Princess Diana alone at the Taj Mahal.

Reynolds went on to star in light romantic comedies and musicals. And soon after her divorce was finalized (when Fisher married Taylor three hours later), she had a best-selling hit with her recording of the popular song about love gone wrong, “Am I That Easy to Forget?”

So what’s next for Bullock? It’s unlikely that she’ll be recording. But let us channel our inner Reynolds and offer her some advice.

GET BACK TO BEING SEEN

More specifically, set up that definitive photo, video and audio soundbite that will run worldwide. We suggest it’s with your most famous and funniest friends: a raucous night out with George Clooney, Betty White, George Lopez, Tim McGraw. Throw in Hugh Grant for good measure. When the images are inevitably run side-by-side with those of James’ goose-stepping, tattooed playmates, we know who’ll come out ahead.

(And maybe we’re overly optimistic, but wouldn’t the most perfect happy ending be if Clooney and Bullock finally hooked up? It would a nice change from his usual assortment of juvenile models, actresses and cocktail waitresses.)

GET BACK TO WORK

Your name is currently attached to four projects in development including two comedies, a romance and a Christmas movie. Even before the James mess erupted, audiences and the industry were anxious to learn what your first post-Oscar film would be, and you’ve acknowledged the weightiness of the decision.

Go for it. Do that project that you considered the ultimate longshot, whether it’s the biggest tearjerker or sappiest girlfriend comedy. Now’s your chance to do a film that’s guaranteed to draw in a huge female audience.

And since men are on your side as well, they might not even bristle at having to come along.

Even those who don’t care much for your work probably like you as a person – you consistently come off grounded, straightforward and kind. (One of my best friends, a well-known and famously cynical LA entertainment reporter, has always been a diehard fan of “Sandy” and admitted to hating having to cover the marital problems.)

While a People or “Today Show” interview would be an invasion of the privacy you’re clearly seeking, have a few solid one-liners memorized to toss out when you’re inevitably buttonholed in public. That’s what publicists are for.

All of us on the outside assume that you’re going to be ending the marriage as carefully as possible to avoid damaging James’ children. But some pundits are theorizing that if you wind up taking James back, it’ll be the worst career move possible.

We have just two words for them: Hillary Clinton.