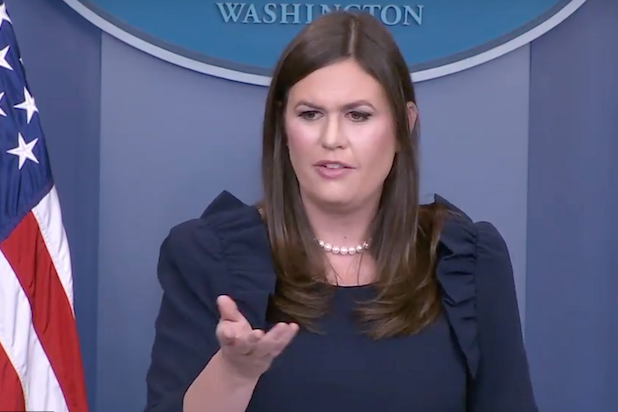 White House Press secretary Sarah Huckabee Sanders pushed back on a Washington Post report that suggested President Trump helped craft a misleading statement on his son Don Jr.’s meeting with a Russian lawyer during the campaign.

Citing multiple people with knowledge of the situation, the Post said Trump personally decided to have the statement say that Trump Jr. had met with the lawyer, Natalia Veselnitskaya, to discuss Russian adoption instead of damaging information about his then-rival Democratic candidate Hillary Clinton.

“He certainly didn’t dictate,” Sanders told reporters during a press corps briefing Tuesday. “He weighed in, offered suggestions — as any father would do.”

The extent of the president’s personal involvement in his son’s response could place him and his aides in legal jeopardy.

“The statement that Don Jr. issued is true,” Sanders said. “There is no inaccuracy in that statement. The president weighed in, as any father would, based on the limited information that he had. This is all discussion, frankly, of no consequence.”

Pressed on what exactly the president knew about the meeting, Sanders went into a tirade against the media for “fueling a false narrative” about Russia.

“Everybody wants to try to make this some story about misleading. The only thing I see misleading is a year’s worth of stories that have been fueling a false narrative about this Russian collusion.”

Sanders then berated the press for not focusing on the Clintons’ interaction with the Kremlin.

“Bill Clinton was paid half a million dollars to give a speech to a Russian bank and was personally thanked by Putin for it,” she said.

Sanders also addressed a Tuesday NPR report about a recent lawsuit which claimed the White House — and possibly President Trump — may have been involved in a discredited Fox News story about the killing of Seth Rich, a Democratic National Committee staffer, last summer.

“The president had no knowledge of this story and it’s completely untrue that he or the White House had any involvement in the story,” Sanders said Tuesday.

Asked whether the meeting between the White House and the parties involved with the story was in any way inappropriate, Sanders said no.

“It doesn’t bother me that the press secretary would take a meeting with somebody involved in the media about a story,” she went on to say. “You guys come to us with stories all day.”