Sarah Michelle Gellar made an unfortunate yet epic social media boo-boo when she told her half-million Twitter followers that ’80s pop star Boy George had died.

Of course, she meant to pay tribute to George Michael, who passed away suddenly Christmas Day of heart failure.

When fans pointed out her mistake, the actress quickly took to Twitter and explained that she had misheard when she was told about George Michael, the 53-year-old pop singer-songwriter who died of heart failure on Christmas Day. 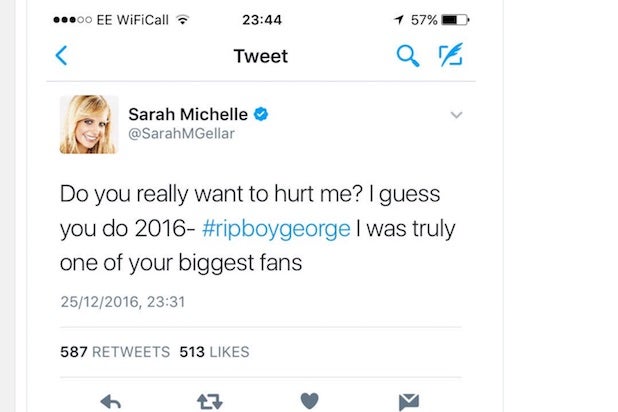 And for the record yes I completely know the difference between Boy George and George Michael- I heard incorrectly. My intentions were good

This is usually why I don't comment on public matters, but it all seemed so sad on Christmas. Lesson learned.

Still, fans of both pop singers were not pleased by the error and were quick to call her out on it.

@SarahMGellar @oshea369 Boy George has checked himself into hospital cos of you!

Can you place some lit candles below your curtains before you go to sleep tonight please? Thanks x

On the flip side, the response to Gellar’s mistake was, for the most part, understanding and supportive in the true spirit of the season:

@SarahMGellar .. People being rude & saying hateful things to SMG should seriously take several seats & shut up!!! Not called for & not ok!!

@SarahMGellar we all make cringeworthy mistakes, yours just happen be public ???? you have the right intentions ❤️ yes, it is very sad x

@SarahMGellar Geez.. lots of respect and Christmas spirit in this thread. She’s human, made a mistake and corrected herself.

@SarahMGellar so many people had so little 2 do on Xmas day they had 2 sit here givin abuse. U r still awesome hun! Hope u had a fun Xmas xx

@SarahMGellar wow. All these negative comments. I guess these people have never made a mistake before. Taylor swift it. Shake it off!!

@SarahMGellar People are idiots. Don’t let these fools get to you.

@SarahMGellar hey we all make mistakes and no need for ppl to be rude about it on FB! Don’t fret about it.