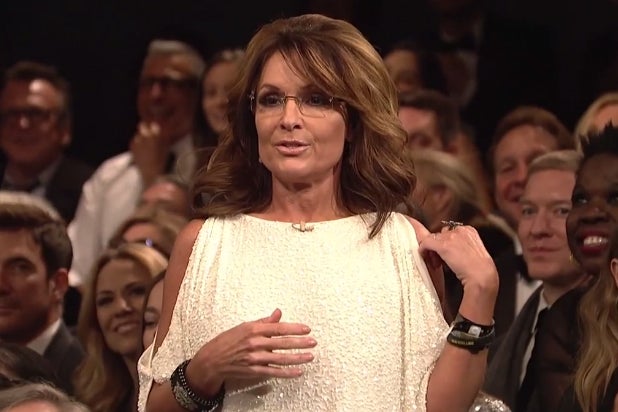 Though she’s been the butt of many a “Saturday Night Live” joke, Sarah Palin wasn’t about to let ropeline hecklers spoil her evening following the sketch show’s 40th anniversary celebration Sunday night.

“Hey, when you get a job, you can talk to me, ok?” the former Alaska governor shouted to one New York naysayer as she posed for photos with supporters outside the “SNL” afterparty. The heckler can be heard in a TMZ video (below) making fun of Palin’s dress — which she says she borrowed from daughter and “Dancing With the Stars” alum Bristol.

“Don’t be jealous, boy!” Palin admonished the jokester, referring to her “showbusiness” career. The erstwhile former GOP vice presidential nominee’s docuseries “Amazing America” was renewed by the Sportsman Channel for a second season in July. It’s set to premiere on Thursday, Feb. 19.

Watch the video of Palin handling her critics: