An audience going into an R-rated animated comedy with anthropomorphic wieners isn’t expecting much in the way of subtlety or restraint, but that audience does expect laughs. Surprisingly, genuine comedy got left off the shopping list in “Sausage Party,” a film designed to be raucous and bawdy that instead winds up sporadically amusing and mostly tedious.

Granted, the idea of living grocery products believing in the glory of a “Great Beyond” that lies just outside their market’s automated doors — only to discover that their “gods” are monstrous humans who plan to devour every last one of them — is a promising idea, and one that no doubt greatly amused co-writers Seth Rogen and Evan Goldberg (“Preacher,” “This Is the End”). But some goofy ideas are best left tacked to a bulletin board (or turned into a ten-minute short) rather than stretched out to feature length.

Rogen voices Frank, a hot dog in a package; he’s excited that the impending “Red, White and Blue Day” (July 4) means he’ll not only get to leave the store but also finally nestle himself inside his girlfriend Brenda (Kristen Wiig), a bun residing in her own plastic housing. (Naturally, the sausages come 10 to a pack while there are only eight buns to a bag.)

They’re on their way to fulfilling their destiny when a returned jar of honey mustard (Danny McBride) rants to his fellow groceries that everything they’ve heard about the Great Beyond is a lie. As the condiment leaps to his death, Frank and Brenda fall out of the cart trying to save him, leading to one of the film’s few genuinely hilarious moments, a clean-up on Aisle 2 that resembles the beginning of “Saving Private Ryan.” 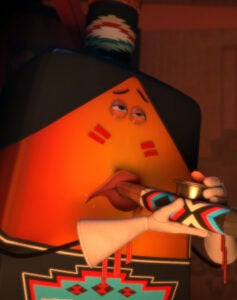 Frank pursues answers — in turn, he’s pursued by a vengeful Douche (Nick Kroll, reprising his “Kroll Show” Bobby Bottleservice character) — as fellow frankfurter Barry (Michael Cera), having witnessed the brutality of where the groceries go, tries to get back inside the store.

When “Sausage Party” isn’t spinning its wheels with an unengaging plot, it tries to comment on ethnic stereotypes while, more often than not, indulging in them: in addition to Salma Hayek as a taco shell who has eyes for Brenda’s curvy form, we get a bagel (Edward Norton, offering a weak Woody Allen impersonation) and a lavash (David Krumholtz) bickering over the occupied territory of the Ethnic Foods aisle, as well as Bill Hader doubling up as both a mustachioed tequila bottle and a “Firewater” whiskey bottle in a performance that will no doubt offend Native Americans throughout the continent.

The animation itself, directed by Greg Tiernan (“Thomas and Friends”) and Conrad Vernon (“Annoying Orange”), is serviceable, but the narrative never fully engages with the notion of the supermarket as a bustling community at night when the doors close. (To be fair, it tackles this idea far better than the legendary animated disaster “Foodfight!” did, but that’s about as low as low bars go.)

The screenplay — from writers Rogen, Goldberg, Kyle Hunter and Ariel Shaffir (“The Night Before”) — almost never pushes the boundaries far enough, seemingly patting itself on the back for peppering the f-word into a cartoon with such frequency. There’s one wonderfully outrageous moment at the film’s (literal) climax, but along the way there, there are neither successful jokes nor a captivating story to keep the proceedings moving. The dopey food puns turn out to be the one source of consistent mirth, and while it’s daring for any movie to go out on a limb to proselytize for atheism, the jabs at religion feel a little forced and unfocused.

There’s a goofy spree of a movie buried deep within “Sausage Party,” but it’s missing both the spree and the goofs. This comedy needed to be a lot smarter if it wanted to succeed at being this stupid.