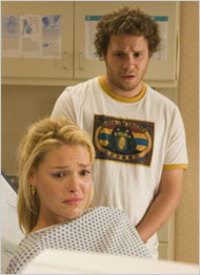 If I say so myself, I loved writing about this topic – the American man-child, as seen through the prism of the Judd Apatow comedy machine. The article is in Sunday’s summer preview section, and observes:

"In the world of “Knocked Up,” the latest big-ticket comedy to take on American mating rituals, the formula is basically thus: Girl meets schlub. Schlub nails girl. Girl hangs around to discover schlub’s inner mensch.

However unlikely a premise, this territory has already been staked out and explored, with considerable success, in television shows like “According to Jim” and movies like “The 40-Year-Old Virgin,” the runaway hit of two summers ago, with a virgin nerd (Steve Carell) in place of the schlub. But “Knocked Up,” whose main promotional image is a close-up of Seth Rogen as the pudgy, pot-smoking, porn-addled, job-free hero of the tale, Ben, may well take its celebration of American schlubitude (loserdom? schlemieliness?) to a new level."

This is a pet topic of mine for some time, but "Knocked  Up" provided a rare opportunity to explore the subject deeply with the very people who are validating this concept in pop culture. They offer such rare insights as this, from Mr. Rogen:  “Most people who are married are half convinced their wife might dump them at any second and they’ll be thrust into the world of finding a mate.”

Mr. Rogen has been dating the same woman for two years. “I had a dream last night that she broke up with me,” he said. “I woke up in a terrible mood, feeling terribly betrayed. Deep down inside we all feel like 40-year-old virgins. It’s lame, but true. Everyone, no matter how many times they’ve had sex, is still afraid he might be bad at it.”  I long ago learned that you really never know what people think, on the inside. Here’s the rest…