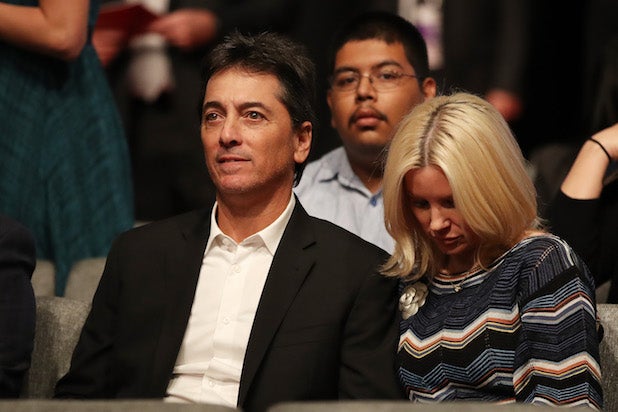 Scott Baio’s wife, Renee Baio, revealed Saturday that she had been diagnosed with microvascular brain disease.

The former actress and stuntwoman told a fan on Twitter that she received the diagnosis four months ago.

“Besides having 2 meningioma brain tumors, in Oct 2017 I also learned I have Microvascular Brain Disease,” Baio said after the fan asked how she was doing “health-wise.”

Besides having 2 meningioma brain tumors, in Oct 2017 I also learned I have Microvascular Brain Disease. @Jerseyshore06

Unfortunately, this is true. Renee is forever my rock, my life & my soulmate! Toughest person I know. @MrsScottBaio https://t.co/fyMtMl8MGX

“Unfortunately, this is true,” he tweeted. “Renee is forever my rock, my life & my soulmate! Toughest person I know.”

In an interview with The Blast, Scott said that Renee was diagnosed with moderate to severe chronic microvascular disease.

“She was a former stuntwoman and had a massive brain injury in ’92 due to a jet ski accident. We don’t know if her tumors and this new disease has anything to do with this,” he said.

“All we know is she must live as stress-free, depression free and anxiety free life as possible and a get good amount of sleep each night,” he added. “This new disease can cause strokes and dementia.”

Also Read: Scott Baio Says Nicole Eggert 'Seduced Me,' But She Wasn't a Minor at the Time (Video)

In 2015, Renee was diagnosed with a meningioma brain tumor.