(Warning: This post contains spoilers for the Season 4 premiere of “SEAL Team.”)

After suffering “40 fall brothers, a broken marriage, a broken body and a broken head,” Jason Hayes (David Boreanaz) told Bravo Team at the end of the two-hour “SEAL Team” Season 4 premiere that he’s out.

“Leading Bravo Team has been the greatest honor of my life. But war has been my refuge for too long,” Bravo 1 told his teammates. “And I’m done. It’s time for Bravo 1 to take a step back from operating and find a life for Jason Hayes.”

And star Boreanaz, who directed the first hour of tonight’s premiere, tells TheWrap Jason is not messing around here.

“For Jason, it’s a time of trying to figure out what life is like outside of the team. And I will say that that doesn’t go too well, it doesn’t bode too well for him,” he said. “I think one of the saddest things for all of these veterans that come back is that they don’t have that sense of unity or community that they sacrificed so much, and how they get treated. So we’ll examine a lot of that and ultimately learn about the character and how his plight is and whether or not he decides to rejoin or maybe just leaves the show.”

Yes, Boreanaz might actually exit “SEAL Team” — but nothing has been decided yet. 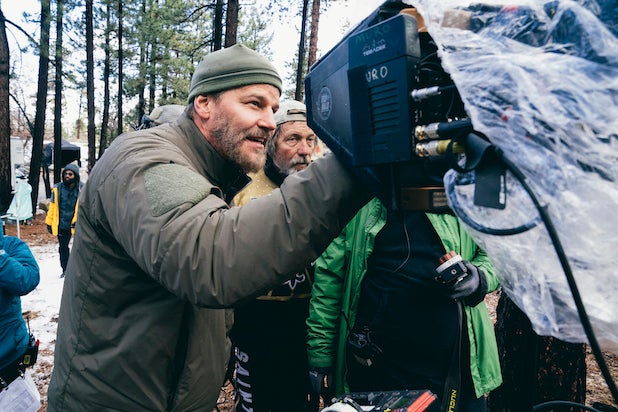 “It’s more about Jason and where his story has gone and where it’s going. I think what’s exciting about this character and the intense, realistic approach to them is that we’ve decided to pile it on that the character are open for being able to leave, be replaced, whatever that is. I mean, we don’t like to sugarcoat it. It’s tough, because we’re on a network show and part of it’s entertainment but we also want to be true to the storyline of what these guys really go through. And if that’s the case, then we can’t really split that up. We can examine it and look at it. But these are all probabilities and I won’t say there is anything written definitely in stone, it’s just there. And we’ll see how that unfolds.”

Jason’s decision to leave Bravo Team this season came after his dear friend and team member Mandy Ellis (Jessica Paré) told him earlier in the “SEAL Team” fourth-season premiere she was leaving her life of service. But Mandy’s exit is more permanent than Jason’s — at least for now — as Paré is actually stepping away from the show.

“There’s a lot of characters leaving, but then trying to find light in other areas for their careers for their characters,” Boreanaz said, referring to both Paré’s Mandy and Lt. Commander Eric Blackburn (played by Judd Lormand, who is now a recurring guest star on “SEAL Team” versus a series regular).

“What’s great about Season 4 is we’re allowed and we’ve earned the right to really get underneath their skin and see where their head is,” Boreanaz added. “And they’re all not there. I mean, they’re going to lose a lot. When you sacrifice, you lose a lot. And in losing a lot, you see more doors open for them. And some will be good that the audience will like and some the audience won’t like. But it’s a continuous revolving door that we can’t shy away from.”