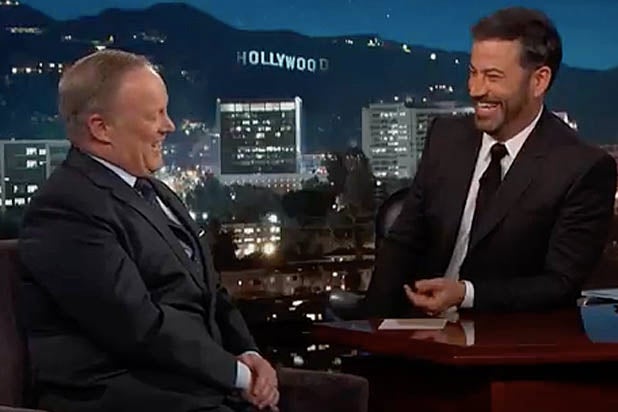 Sean Spicer may have found his next permanent gig: Jimmy Kimmel’s sidekick.

It could be a win/win, as the former White House Press Secretary just handed “Jimmy Kimmel Live!” its top TV rating in three months. Wednesday night, Kimmel hauled in a 2.1 rating/6 share in Nielsen’s households, which tally 56 metered markets.

That’s the best the ABC late-night show has fared since following Game 5 of the NBA Finals back in mid-June.

Excluding that championship series altogether, Wednesday would have been Kimmel’s highest-rated show in six months. And if we only study that specific weeknight, it’s the been the best non-NBA Wednesday finish in eight months.

That 2.1 was 24 percent better than Kimmel’s week-ago numbers. Last night, it topped “The Tonight Show Starring Jimmy Fallon” (a 1.8) by 17 percent. “The Late Show with Stephen Colbert” is in repeats this week.

There’s a note here we have to pass along:

As a result of not meeting the required minimum in-tab thresholds, the following markets have been excluded from Wednesday’s averages: Tampa, Miami, Orlando, West Palm Beach, Jacksonville, Fort Meyers-Naples.

Yes, that’s on you, Hurricane Irma.