When casting a play, film or TV show, directors will often do something called a “chemistry read,” because choosing the right actors for the role isn’t always as important as selecting performers who will click with each other. The idea of casting for chemistry should perhaps have played a larger part of Billy Ray‘s process in putting together “Secret in Their Eyes,” because he’s given us three very talented actors who seem to be working in three different movies.

Writer-director Ray (“Shattered Glass”) assembles Chiwitel Ejiofor, Nicole Kidman and Julia Roberts in a remake of the 2010 Argentine thriller that won the Best Foreign Film Oscar, and while the transition into U.S. concerns — specifically, the aftermath of 9/11 — goes smoothly, the film itself never completely coheres. “Secret” contains a passel of interesting ideas and effective scenes that don’t add up to an interesting whole.

The story jumps back and forth between the present and 2002, with the graying of Ejiofor’s hair operating as the most potent signifier of when scenes are taking place. Thirteen years ago, FBI agent Ray Kasten (Ejiofor) worked with investigator Jess Cobb (Roberts) and deputy DA Claire Sloan (Kidman) on a special anti-terrorism task force; the country was still reeling from the attacks of the previous year, and the fear that L.A. would be next put law enforcement on high alert.

Their squad keeps a close eye on an L.A. mosque, and their discovery of a corpse in a dumpster next to that mosque becomes shatteringly personal when the body is identified as Caroline Cobb (Zoe Graham, “Boyhood”), Jess’ daughter. Kasten pieces together evidence suggesting “Pac-Man” Marzin (Joe Cole) as a suspect, but he’s stymied in his pursuit, since Marzin is also working as an informant inside the mosque, providing intel to Kasten’s colleague Siefert (Michael Kelly, “House of Cards”). Their boss Morales (Alfred Molina) makes it clear that Marzin’s importance as a snitch outweighs Kasten suspicions, particularly since the fed’s evidence is mostly circumstantial. 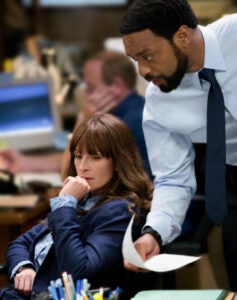 Marzin apparently disappears — with what would appear to be some inside help — and the case haunts Kasten, Cobb and Sloan for some time thereafter. But in 2015, when the now-retired Kasten finds a mugshot online of a man who he thinks might be Marzin, he returns to L.A. to stir up old ghosts and an unresolved case, no matter the consequences.

Billy Ray calls up the spirit of 2002 with great efficacy, from the constant news coverage of the buildup to war in Iraq to the color-coded terror alerts, with his best work coming in the procedural scenes. There’s a bravura sequence in which cinematographer Daniel Moder (“The Normal Heart”) swoops into a packed Dodgers Stadium as a prelude to a gripping chase scene, and Kasten’s dogged pursuit of his suspect allows Ejiofor to interact with seasoned character actors like Kelly, Molina and Dean Norris.

The one moment of the film where Ejiofor and Kidman play off each other with anything resembling intensity is a scene where they get to play good-cop/bad-cop, but their love story is more passionate in the description than in the playing. (In fact, if they and other characters didn’t talk about their grand romance so often, we’d barely register that it was supposed to be happening.) Kidman is convincing as a Harvard-educated lawyer climbing the political ladder — she’s a very cool customer done up in career-woman glam — but she never sells the ardor her character allegedly feels for Kasten.

As for Roberts, she commits to an aggressive lack of movie-star sheen, sporting unflattering bangs even before Caroline’s death, and eschewing makeup afterward. She radiates anguish throughout, but the performance is operating at a completely different frequency than what her co-stars are playing; it’s like watching Mother Courage share the stage with Blanche DuBois. All three leads are doing solid work, but it’s ultimately in a vacuum.

“Secret in Their Eyes” certainly aims high in its attempts to marry the personal and the political, but by the time you hit the movie’s big third-act twists, the film’s inconsistencies and artificialities prevent those moments from playing as anything other than gimmicky. This isn’t a lazy or contemptuous movie, but for all its ambitions, it just doesn’t work.