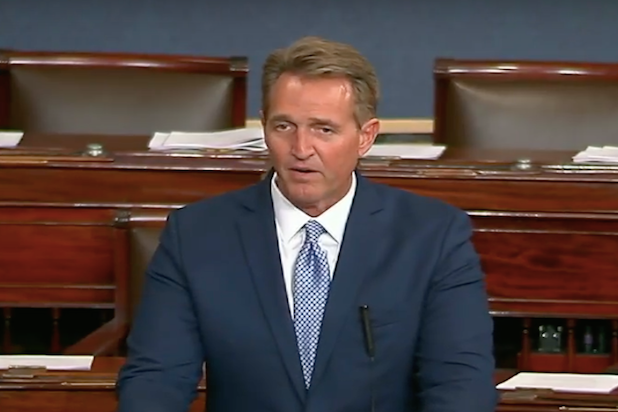 Republican Arizona Sen. Jeff Flake’s dramatic announcement that he will not seek re-election in 2018 — a Senate-floor speech filled with shots at President Trump — has set off rampant speculation about what his decision means for his party.

“I’m announcing today that my service in the Senate will conclude at the end of my term in early January 2019,” said Flake, one of President Trump’s most vocal Republican critics. “It is clear at this moment that a traditional conservative, who believes in limited government and free markets, devoted to free trade, pro-immigration, has a narrower and narrower path to nomination in the Republican party.”

Flake has been saddled with low poll numbers and faced a nasty primary challenger in the form of osteopathic physician Kelli Ward.

Also Read: US Senators Sent to Deserted Island for 'Survivor'-Style Show on Discovery

“We must never regard as ‘normal’ the regular and casual undermining of our democratic norms and ideals,” said Flake. “We must never meekly accept the daily sundering of our country — the personal attacks, the threats against principles, freedoms, and institutions; the flagrant disregard for truth or decency, the reckless provocations, most often for the pettiest and most personal reasons, reasons having nothing whatsoever to do with the fortunes of the people that we have all been elected to serve.”

Some on Twitter, especially, those who lean left, rejoiced, and said other politicians of conscience should follow his lead. But Trump supporters hoped he would hurry on his way out. Here are some tweets:

Footage from Senate Leadership Fund board meeting following news that Jeff Flake is dropping out of senate race > > pic.twitter.com/JFA6TVD9xG

Flake shows that view of Trump is a true character test for every Republican. Short-term win for Trump but sets up wipe out in ’18.

A party favoring fearmongers and demagogues over men like Flake, Corker & McCain is no home for true conservatives and cannot lead America.

Remember when the “experts” said @kelliwardaz had no chance at winning?

With Jeff Flake retiring, we must do everything we can to show that we are ready to win #AZSEN. Chip in now: https://t.co/3XnVqqVF9C

THE critical difference between Flake & Corker today: Corker doesn’t care if other Senators join him. Flake says conscience DEMANDS they do