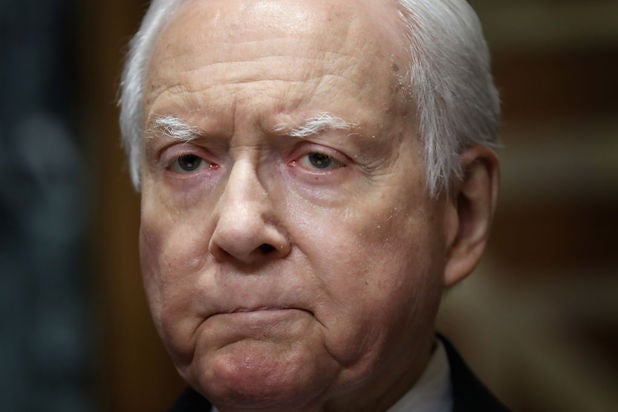 The 84-year-old Utah senator didn’t seem to know how the social network — one of the two biggest advertising companies on the internet — makes its revenue. (Hint: It’s by offering a free site propped up by targeted ads.)

“So, how do you sustain a business model in which users don’t pay for your service?” Sen. Hatch asked Mark Zuckerberg on Tuesday.

Sen. Hatch: "If [a version of Facebook will always be free], how do you sustain a business model in which users don't pay for your service?"
Mark Zuckerberg: "Senator, we run ads." https://t.co/CbFO899XlU pic.twitter.com/bGKWks7zIk

The exchange instantly caught fire on Twitter, and the jokes started to roll in at Hatch’s expense.

Orrin Hatch: “This is the craziest computer shit I’ve been involved in since the late 90s!”

Senator Orrin Hatch to Mark Zuckerberg: “So it’s not a real book?”

Orrin Hatch just asked how Facebook makes money, but, in his defense, he was distracted because he forgot where he parked his dinosaur.#Zuckerberg

Hatch: “How do sustain a business model in which people users don’t pay for your service?”

ICYMI Senator Hatch has #Zuckerberg in the hot seat. If Facebook is free, how do you profit? "We sell ads" watch his face & squirming. pic.twitter.com/yvMImclkBL

Zuckerberg was on Capitol Hill for the first of two days of congressional testimony on the Cambridge Analytica data leak — when 87 million users had their profile information unwittingly shared. Zuckerberg took responsibility for the leak, as well as the company’s inability to weed out Russian disinformation during the 2016 U.S. election.

“One of my greatest regrets in running the company is that we were slow in identifying the Russian information operations in 2016,” Zuckerberg said in response to a question from Sen. Dianne Feinstein (D-California). “We expected them to do a number of more traditional cyberattacks — which we did identify and notified the campaigns that they were trying to hack into them —  but we were slow in identifying the type of new information operations.”