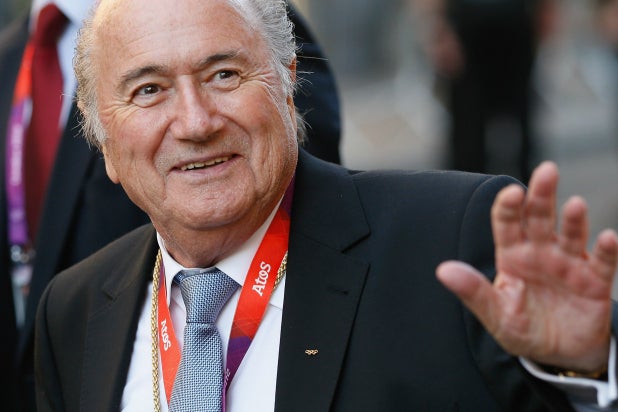 Sepp Blatter will resign as FIFA president following a massive bribery scandal that rocked the soccer world recently. The soccer organization’s leader will remain with his post until a replacement is elected.

“I have thoroughly thought about my presidency and the 40 years FIFA has played in my life,” Blatter started his resignation statement, according to The Guardian. “I love FIFA more than anything else and I only want to do the best. I decided to stand again for election for the good of football.”

“My mandate does not appear to be supported by everybody,” he continued. “This is why I will call an extraordinary meeting.”

Blatter was re-elected last week as FIFA president, despite the shocking allegations that shook his organization.

“I will organize extraordinary congress for a replacement for me as president,” Blatter went on. “I will not stand. I am now free from the constraints of an election. I will be in a position to focus on profound reforms. For many years we have called for reforms. But these are not sufficient.”

“We need a limitation on mandates and terms of office,” he added. “I have fought for these changes but my efforts have been counteracted.”

“FIFA’s interest are dear to me. That’s why I have taken this decision,” Blatter concluded. “What counts most for me, is the institution of FIFA and football around the world.”

I have been reflecting deeply about my presidency and about the 40 years in which my life has been inextricably bound to FIFA and the great sport of football. I cherish FIFA more than anything and I want to do only what is best for Fifa and for football. I felt compelled to stand for re-election, as I believed that this was the best thing for the organisation. That election is over but FIFA’s challenges are not. FIFA needs a profound overhaul.

While I have a mandate from the membership of FIFA, I do not feel that I have a mandate from the entire world of football – the fans, the players, the clubs, the people who live, breathe and love football as much as we all do at FIFA. Therefore, I have decided to lay down my mandate at an extraordinary elective Congress. I will continue to exercise my functions as FIFA President until that election. The next ordinary FIFA Congress will take place on 13 May 2016 in Mexico City. This would create unnecessary delay and I will urge the Executive Committee to organise an Extraordinary Congress for the election of my successor at the earliest opportunity. This will need to be done in line with FIFA’s statutes and we must allow enough time for the best candidates to present themselves and to campaign. Since I shall not be a candidate, and am therefore now free from the constraints that elections inevitably impose, I shall be able to focus on driving far-reaching, fundamental reforms that transcend our previous efforts.

This time, I will succeed. I cannot do this alone. I have asked Domenico Scala to oversee the introduction and implementation of these and other measures. Mr Scala is the Independent Chairman of our Audit and Compliance Committee elected by the FIFA Congress. He is also the Chairman of the ad hoc Electoral Committee and, as such, he will oversee the election of my successor. Mr Scala enjoys the confidence of a wide range of constituents within and outside of FIFA and has all the knowledge and experience necessary to help tackle these major reforms. It is my deep care for FIFA and its interests, which I hold very dear, that has led me to take this decision. I would like to thank those who have always supported me in a constructive and loyal manner as President of Fifa and who have done so much for the game that we all love. What matters to me more than anything is that when all of this is over, football is the winner.