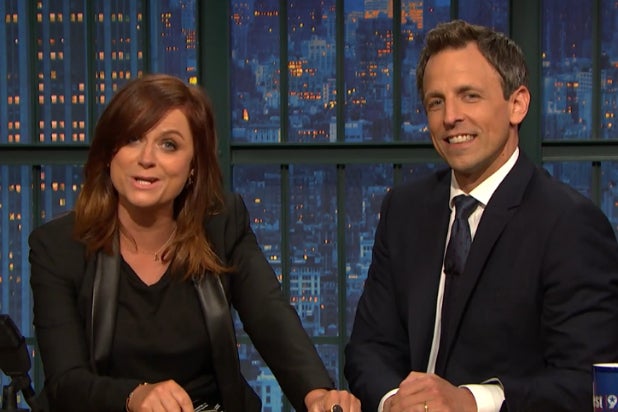 The former “Weekend Update” gang dropped a new topical version of “REALLY!?!” on NBC last night, much to the delight of the Studio 8G crowd. Fittingly, Meyers’ new studio is mere steps away from “Saturday Night Live’s” Studio 8H.

The topic that kicked off the desk skit was whether or not women’s sports are worth watching. Sports Illustrated contributor Andy Benoit said no way via Twitter — to which Amy and Seth strongly objected.

“I guess I’m not surprised that you work for Sports Illustrated, you guys put out a Swimsuit Issue every year dedicated entirely to women who aren’t in sports,” Poehler said. “Unless you think it’s a sports to cover both boobs with one arm — Really!?!”

“If you want to attack someone for playing soccer, how about children?” Meyers offered. “Now that is boring.”