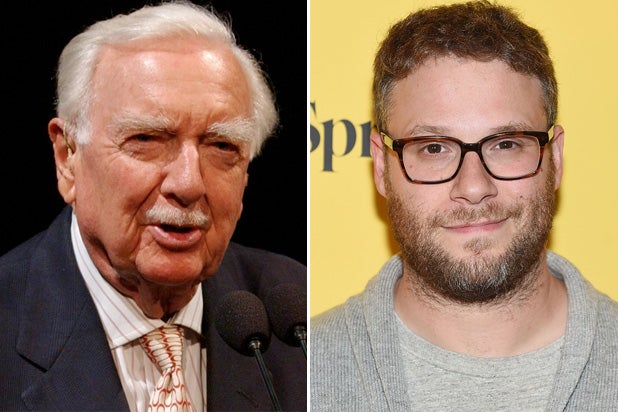 Seth Rogen is set to play famed CBS anchorman Walter Cronkite in the biopic drama “Newsflash,” which will go inside Cronkite’s newsroom on the day of John F. Kennedy’s assassination, TheWrap has learned.

On Nov. 22, 1963, Cronkite had one of his most well-known moments as a newscaster when he announced to a shocked America that Kennedy had died at a hospital in Dallas. After taking a moment to remove his glasses and collect himself, Cronkite then announced that Lyndon B. Johnson had been sworn in as the new President of the United States. “Newsflash” will reveal how the day unfolded at CBS News.

“Newsflash” is being produced by former Warner Bros. production head Greg Silverman through his new company Stampede Ventures. David Gordon Green, director of the Boston Marathon bombing film “Stronger,” is attached to directed from a script by Ben Jacoby that has been included on this year’s BlackList.

Rogen, who is mostly known for comedies like “Neighbors,” is entering new territory as the lead in a drama, though he did play a supporting role alongside Michael Fassbender in “Steve Jobs.” Other comedians have been able to make the leap into drama, namely Steve Carell, who earned an Oscar nomination for his work in “Foxcatcher” and recently starred as a mourning father of a killed Iraq War soldier in Richard Linklater’s “Last Flag Flying.”