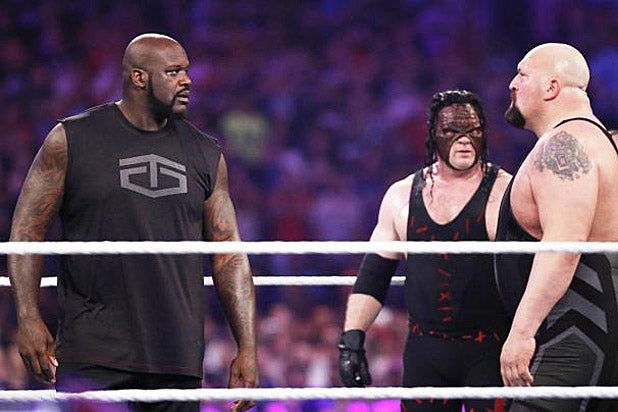 Is it a bird, is it a plane? No, it’s Shaq leaping into the ring at WrestleMania 32.

NBA legend Shaquille O’Neal finally lived up to his vow to take part in the WWE’s flagship event on Sunday at the AT&T Stadium in Arlington, Texas.

Towering over 7 feet tall, the former Los Angeles Lakers and Miami Heat star faced off against the Big Show in the Andre The Giant Memorial Battle Royal.

WrestleMania, which sold out the Dallas Cowboys’ home stadium with more than 100,000 WWE fans, also featured the WWE Intercontinental Championship, the Divas Championship, a title bout between Triple H and Roman Reigns, and the highly anticpated Hell in a Cell battle with Shane McMahon taking on The Undertaker.

Of course, the main man of the night was Dwayne “The Rock” Johnson, who took a break from filming the upcoming “Baywatch” reboot and Season 2 of HBO’s “Ballers” to return to his wrestling roots.

Johnson came out guns — and by that we mean “a flamethrower” — blazing and drove the crowd wild as he set a sign of “The Rock” alight.

See video of Shaq below.

WHAT?! @SHAQ is here to participate in the #AndreBattleRoyal, and @WWETheBigShow isn't pleased! #WrestleMania pic.twitter.com/ll49kWbget