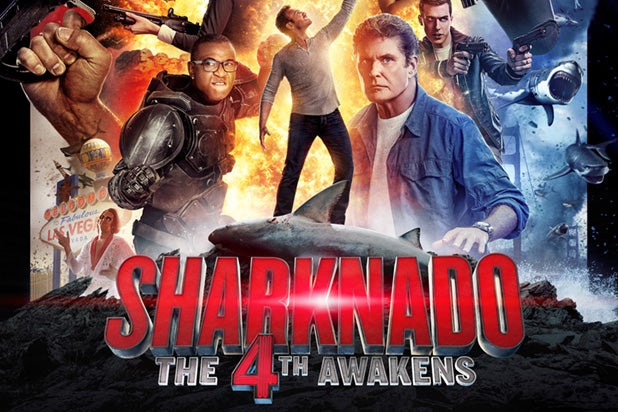 No one ever claimed “Sharknado” fans have refined taste. But what they lack in sophistication, they sure make up for in passion and good humor.

Now a top trending topic, Twitter is afire with fan tweets ahead of Sunday night’s premiere of the Syfy television movie sequel of “Sharknado: The 4th Awakens.” The network is in the midst of an eight-hour marathon that ends tonight with the series’ new installment.

Some fans got pretty creative, making “Sharknado”-themed baked goods, shark attack videos and even a shark-shaped piñada! (See them below.)

Also Read: 'Sharknado 4' Review: This Joke Has No Teeth Anymore

Cameos are also in store from Duane Chapman (“Dog the Bounty Hunter”) as a chainsaw dealer; Lori Greiner (“Shark Tank”) as a home shopping guru; and Patti Stanger (“Millionaire Matchmaker”) as a TV reporter.

The movie, written by Thunder Levin and directed by Anthony C. Ferrante, takes place five years after “Sharknado 3: Oh Hell No!” with the official description from Syfy teasing, “Fin (Ziering), his family and the cosmos have been blissfully sharknado-free in the intervening years, but now sharks — and ‘nados! — are being whipped up in places (and ways) least expected.”

Here are some of the best fan tweets trending now:

Oh no! It's a Sharknado in the house! #Sharknado4 pic.twitter.com/f40UitA4E0

My wife is so excited about #Sharknado4 tonight she made a cake ???????? pic.twitter.com/nlNLIzflAP

We got a shark piñata for this movie lol ???? #SharknadoParty #Sharknado4 pic.twitter.com/4dKoVwNb5l