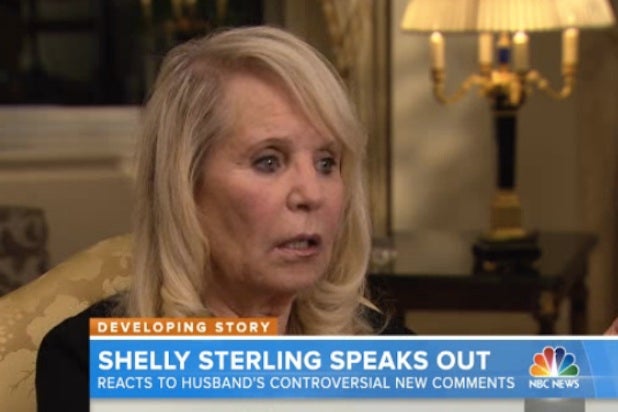 Donald Sterling’s wife wants to hold on to the Clippers, and thinks the NBA is being sexist in trying to push her out.

“I really think so,” Shelly Sterling told “Today” show host Savannah Guthrie on Tuesday when asked if the league had an anti-woman bias. “If an owner’s wife say the same thing, would the owner be asked to leave the NBA? Or would they just say, ‘Well, she’s only the wife?”’

Sterling also watched the beleaguered Clippers owner’s interview with Anderson Cooper and tried to make sense of his comments, which included harsh words for Magic Johnson and half-apologies for his original diatribe.

“He’s not the man I know. Or I knew. There’s something wrong,” she insisted.

“What do you think is wrong with him?” Guthrie asked.

“I really think personally he has dementia,” Sterling said. “I don’t think it happened overnight, it’s been happening but nobody really knew the reason. He gets crazy and yells and screams and hollers one moment and then the next moment he’ll talk about something else. It’s like nothing makes sense.”