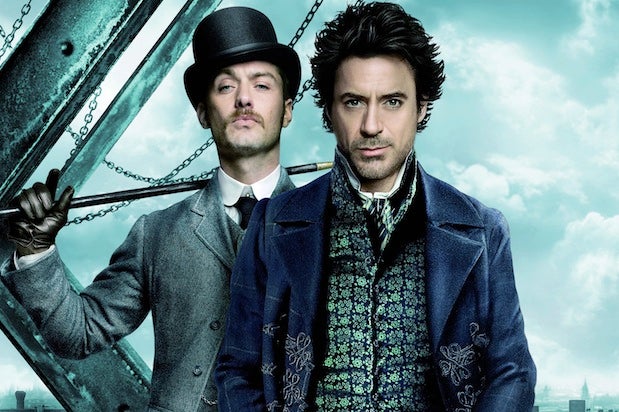 Looks like the mystery of the delayed sequel will take a bit longer to solve, as Warner Bros. and Village Roadshow announced Monday that the release of “Sherlock Holmes 3” has been pushed back a full year. The still-untitled follow up to 2011’s “Sherlock Holmes: A Game of Shadows” will now hit theaters December 22. 2021, instead of December 25, 2020.

The first two films — 2009’s “Sherlock Holmes” and 2011’s “A Game of Shadows” — were directed by Guy Ritchie and starred Robert Downey Jr. and Jude Law as Holmes and Watson, respectively. It is not known if Downey and Law will return for the third outing.

Producers Susan Downey, Joel Silver and Lionel Wigram are returning to oversee this project, with “Narcos” co-creator Chris Brancato currently attached to write the script. No director has been chosen for the project yet; Ritchie most recently directed Disney’s upcoming remake of “Aladdin,” which comes out in May, and his next film is the crime thriller “Bush,” starring Matthew McConaughey, “Crazy Rich Asians” breakout Henry Golding and Hugh Grant.

“A Game of Shadows” grossed $545 million worldwide. Downey won a Golden Globe in 2010 for his work on the first installment of the series, in which Holmes and Law’s Dr. Watson uncover a supernatural plot to expand the British Empire.