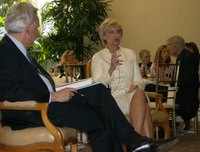 Editor-turned-writer Tina Brown gathered with a few friends — David Geffen, Michael Eisner, Martin Landau, Steve Martin – for a little lunch at the Bel-Air Hotel today, to celebrate her new book, "The Diana Chronicles." They served Diana’s favorite dish — fish and chips — which was a little crazy. Who on the West Side of Los Angeles, did they think, was going to eat fried food? Anyway, Brown and her book have quickly become the toast of literati/glitterati circles. Her meditation on the death of Diana (could we stand another one? apparently) has managed to win glowing reviews, and is about to land at Number Two on the NYT Bestseller list. It’s hard to miss Brown on her nonstop media whirligig tour, but this was an undeniably fun event: Geffen wore a suit, for once, and introduced Brown as "Guantanamo with an English accent." (This is David Geffen’s version of a compliment.) Brown charmed the powdered masses with her wit and tales of a complicated princess. (One nugget I’d overlooked: Diana pushed her stepmother down some stairs after her father died. The stepmother apparently deserved it, but still.) And she got in a dig at Rupert Murdoch, who bought the Times of London when her husband, Harold Evans, was editor there. "Rupert will do what he likes with the Wall Street Journal," said Brown. "He always knows how to get a Yes."