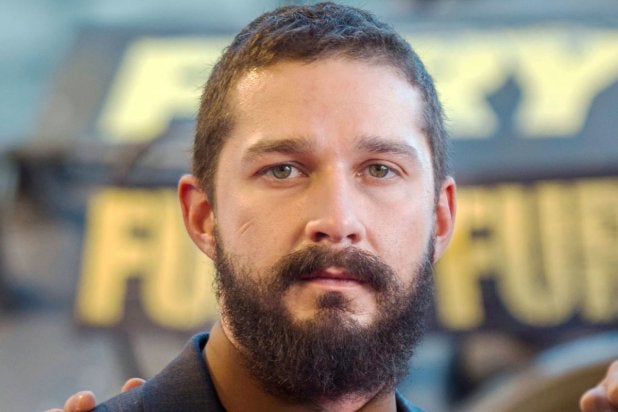 Shia LaBeouf was arrested on early Thursday morning in New York after an alleged altercation during his anti-Donald Trump livestream.

During the livestream, a man approached LaBeouf and said “Hitler did nothing wrong,” leading to the altercation. “He pulled another man’s scarf, causing a scratch to that man’s face,” an NYPD spokesman told People. “Also pushed that man … causing him to fall to the ground.”

The other man refused medical attention. LaBeouf was arrested without incident and charged with misdemeanor assault and a harassment violation.

LaBeouf launched his livestream, which he is calling “He Will Not Divide Us,” on Friday, the day of Trump’s inauguration. The project  involves a camera mounted on a wall outside the Museum of the Moving Image, New York.

“Open to all, 24 hours seven days a week, the participatory performance will be live-streamed continuously for four years, or the duration of the presidency,” an announcement for the project said. “In this way, the mantra ‘He Will Not Divide Us’ acts as a show of resistance or insistence, opposition or optimism, guided by the spirit of each individual participant and the community.”

This is the latest in a string of performance art projects LaBeouf has engaged in over the years. Previous projects include staying in an elevator for 24 hours, taking phone calls from the pubic for four days, and sitting silently at a table while wearing a bag reading “I am not famous anymore” over his head as visitors filed in and out.

Protesters attend the Women's March Saturday in Park City, Utah, in the midst of the Sundance Film Festival.

Photographed by Sara Terry for TheWrap