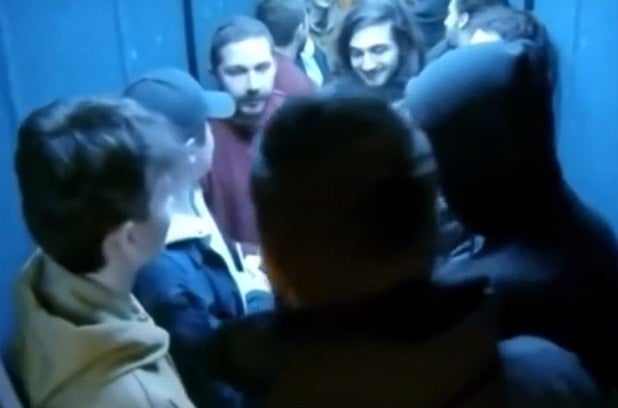 Shia LeBeouf whacked an Oxford University student in the face inside an elevator on Friday night, but he didn’t want to do it, and complied only after his victim convinced the actor that getting punched would help him relax.

It was another art-is-stranger-than-truth moment for LeBouf, who has pulled stunts of his own at art installations and cultural events all around the globe. The wacky actor on Friday was spending 24 hours in an elevator at Oxford Union as part of a social media experiment at the British university.

“Aw, man. You want me to punch you in the face?” he said. When the actor still didn’t launch his fist, the student responded with “Do it. Don’t be a pussy,” as the group inside the elevator exploded into giggles. Finally, the reluctant LaBeouf agreed to a compromise — he’d slap him — and he did, audibly.

Afterwards, the student told Cherwell, Oxford’s student-run newspaper, that he decided to ask LaBeouf to hit him because he thought the star might be “bored.”

The video is below. There’s no real action — they’re in an elevator, remember — till the 0:45 mark, and even after that there’s not a ton. See if it gets rid of your boredom: