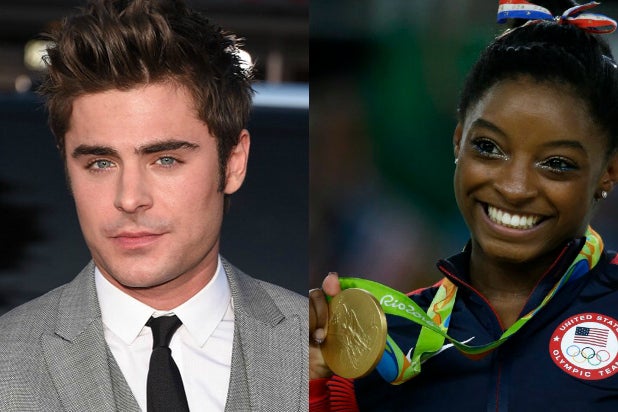 As any proud fan would do, Biles documented their meeting on Tuesday on Twitter, sharing several photos and even a video of actor giving the star olympian a quick kiss on the cheek. (See it below).

“Proof : had to do a retake bc I thought we were taking a picture then he kissed me instead,” tweeted Biles.

She also published a few more posts covering their meeting and now “Zac Efron” is trending on Twitter.

Much has been made of the U.S. Olympic gymnast’s crush on Efron as she has not been shy about sharing her adoration for the 28-year-old actor.

NBC’s “Today” host Hoda Kotb arranged the surprise. Before the whole thing airs tomorrow, you can watch a sneak peek of it here.

At 4-foot-9, the 19-year-old powerhouse won gold in the women’s vault, the team all-around, the women’s floor exercise and the women’s individual all-around. She also won bronze in women’s beam, which halted her bid for five gold medals.

Biles won her fourth gold on Tuesday after earning 15.966 score in near-flawless floor exercise that was topped with her signature move — the Biles — a double layout with a half-twist and a blind landing.

Here’s Biles with her beloved Efron:

proof : had to do a retake bc I thought we were taking a picture then he kissed me instead ❤️ pic.twitter.com/rld33V14qe