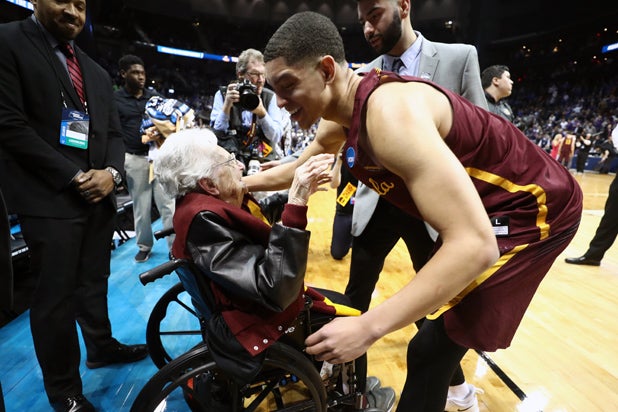 Has Loyola-Chicago’s surprise March Madness run been a gift from God? Well, the Cinderella team certainly has 98-year-old Sister Jean on its side.

The most famous nun in America was cheering on her team once again Thursday night as the Ramblers beat Nevada 69-68 in a Sweet Sixteen round thriller.

Loyola-Chicago is now heading to its first Elite Eight appearance since the team won the NCAA tournament in 1963. The underdog win also cements Sister Jean as an internet sensation.

“Couldn’t tell you one person on Loyola’s basketball team but everyone knows who Sister Jean is. Kinda silly right?” one Twitter user observed.

“Kentucky needs to win so we can live to see Sister Jean trash talk John Calipari,” one user wrote. Well that’s not going to happen, as Kentucky lost to Kansas State for the first time later in the night so the Ramblers will face the Wildcats on Saturday.

As for Sister Jean herself, she told ESPN after the game: “I am so grateful to the young men for doing this … I am trying to keep myself calm but I know that I am not.”

In fact, the die-hard fan doesn’t care that her own bracket was busted by the Ramblers’ latest victory, but told the team “you have to go a little bit more now.” She also predicted that the “viewing numbers should go up after this weekend.” You can thank her for that, CBS and Turner Sports.

Before the 2018 Championship, she had never actually attended an NCAA game. “I watched on television for years before you were born,” she told reporters Thursday night.

Loyola Chicago is moving on. And, perhaps more importantly, they’re taking their X-Factor with them: Sister Jean! https://t.co/G6ZW9j5QoB pic.twitter.com/YSO2r1iKoV

Sister Jean is gonna pray Layola-Chicago all the way to the National championship game !

Couldn’t tell you one person on Loyola’s basketball team but everyone knows who Sister Jean is. Kinda silly right?

Sister Jean is the goat

Sister Jean is a national treasure!

Sister Jean is the best part of #MarchMadness.