The premise for “Snowtime!” is simple enough: Children on a two-week winter school break in a small village learn valuable life lessons when they form two teams for a huge (and greatly allegorical) snowball fight. But the Canadian film, which received a 70 percent fresh rating from Rotten Tomatoes, has won acclaim for a charming, whimsical look whose wintry persona is come by honestly. “Lord of the Flies” with snowballs, it’s not.

“We know what winter looks like, we know what winter feels like,” director Jean-Francois Pouliot, who lives in Montreal, said at TheWrap Screening Series on Monday in West Hollywood. “I came in with one objective as far as look and style: I want this film to feel like winter much more than ‘Frozen.’ I admire ‘Frozen,’ but I want this film to have the feeling of wet wool.

“Winter has very different colors. It has all the colors you see in our film,” he continued, while speaking to TheWrap’s Sharon Waxman alongside Paul Risacher, one of the film’s screenwriters, .

“War is a messy, messy business,” a “Snowtime!” character says, making a statement that’s more than a little true of the film’s own creation. One of 27 films vying for the 2017 animation Oscar, it reflects collaboration; innovative ways of resolving indie and big-budget esthetics, live-action and animation realities — plus a grasp of the power of a familiar story, and the risks of finding a new way to tell it.

“Snowtime!” is the animated remake of “The Dog Who Stopped the War,” a 1984 live-action film that endeared itself to Canadian children. American singer Ross Lynch (co-founder of the group R5), Canadian actresses Sandra Oh (“Grey’s Anatomy”) and Lucinda Davis are some of the versatile voice-actor cast.

Pouliot, a veteran TV-ad director, came to the project from a different perspective. “I’m a live-action director, so when they called me, I asked them ‘do you have the wrong number?'” Pouliot was pursued because of his storytelling skills and his way of working with actors. Both would be valuable in the “Snowtime!” gestation.

“I soon discovered 3-D animated films is somewhere between classical animation and live action,” Pouliot said. “So I really decided to [do] this film as if it was live action. I had a co-director, Francois Brisson, who is a specialist in animation, and that allowed me to consider the film as if it were live action.” Working on a relatively small budget of about $9.5 million — “take a Dreamworks film and take out a couple of zeroes,” Pouliot said — forced the “Snowtime!” team to get creative.

“We tried to engineer backward and said, ‘what level of animation can we allow ourselves?’ Because I come from live action, I really relied a lot on live actors … We would take all the animators assigned to that scene, and I would direct them as if they were actors; they were recording it, they were asking questions, often playing out the scene.” 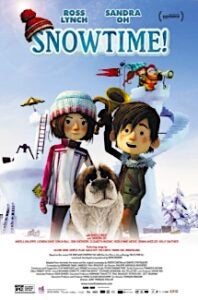 Live actors were summoned for other skills. “I did cast some real actors to help me design the movements of the characters. I wanted people who could translate characters into body movement,” Pouliot said. “So we worked together for many days and then we did trial and error: the feet go in, the body stretches here, this is the walk.’

One risk in redoing a widely-known story is the baked-in emotion the re-creators bring to the project. Pouliot found that fidelity to the truth of the story didn’t have to be overdone. “When you come with these feelings, the danger is always to overact,” he said. “The thing we did all through the film is to bring it down, bring it down, bring it down. By reverse engineering and forcing ourselves to work within the means we had, we were able to come up with something that’s consistent.”

Also Read: 'It's Only the End of the World' Director Xavier Dolan on His Love of 'Tough Protagonists'

And knowing a story well has its upside, said screenwriter Risacher, donning his EP’s hat. “Because the animators had all seen the live-action version, and because it had touched them so much, people were actually asking to come work on this film. So you get a level of enthusiasm in the team that they’re prepared to work longer and work harder. It’s one of the advantages as an independent that we can exploit — I’ll say it.”

Since the film’s U.S. release in February, the filmmakers have come under fire for an ending some reviewers and moviegoers said was too heavy for children — an ending in which one of the “Snowtime!” characters, a lesser character but one viewers fell in love with, dies.

For Pouliot, it was necessary. “We pamper kids today in a way that is not necessarily the best way,” he said. “Fairy tales were made for kids to experience difficult situations in order for them to build the tools to be able to confront these situations in real life later.”

Some people get it. Pouliot related how, after a recent screening of “Snowtime!” at an Italian film festival, children were asked for their reaction to the character’s death. A six-year-old boy stood and told him, “sadness isn’t a bad feeling!”

“This,” Pouliot said, “is a film that will allow kids to speak out and to internalize and begin the process of understanding what mourning is all about, so that when it does happen, they’re better equipped.” Issues with making death real for children haven’t stopped people from recognizing the film’s artistic merit. “Snowtime” grossed $3.4 million at the box office.