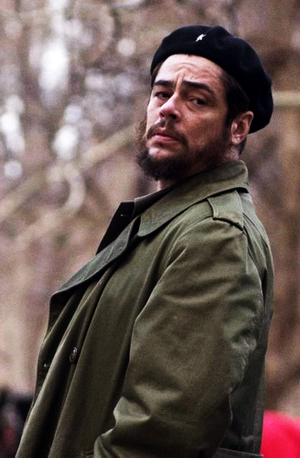 Steven Soderbergh’s epic biography of the revolutionary Che Guevara, titled "Che," has been acquired by IFC Films for distribution in North America, the company announced. It is currently screening at the Toronto Film Festival.

This is undoubtedly a welcome relief for the director and producers — his star Benicio del Toro with producer Laura Bickford — who have been trying to sell distribution rights for months. The film debuted at Cannes to a warm reception — del Toro won the top acting award for his performance.

But it is looooong, possibly the longest film in recent Hollywood history: four hours and 18 minutes at Cannes. ( The film is 15 minutes shorter than the Cannes version, I’m told by a spokesperson. Soderbergh initially thought to release it in two parts, but at Cannes insisted he wanted it to screen as a single oeuvre.

Apparently he has now seen the light of compromise. The film, I am told by one of its representatives, can be broken into two separate parts. It will be screened for Oscar consideration in late December as a single film, but will have the option of being shown in two parts once in theaters in January. No decision yet on which way it will be presented in wider release, as one film or two.