Journalist and novelist Brendan I. Koerner has called Jesse Rapaport’s “Soldier of Misfortune” podcast a “shameless rip-off” of his May 2021 article for The Atlantic about the 1974 kidnapping of John Patterson.

In a Twitter thread Monday, Koerner also took issue with another podcast seemingly based on his 2008 book “Now the Hell Will Start: One Soldier’s Flight from the Greatest Manhunt of World War II.”

Koerner shared a link to the podcast and to his article, which he called the “obvious source material.”

“[It] took me 9 years to report and write. Every key detail in the podcast comes directly from the story’s text, without any attribution,” he tweeted.

“What’s truly wild is that the creator emailed me last fall and was candid about his plans to steal my work. He asked me to help him rip off my own story in exchange for, uh, free publicity. I ignored him, figuring he’d never move forward with such a shady project. I was wrong,” wrote Koerner, sharing screencaps of the email exchange.

A source familiar with Spotify told TheWrap that neither the music streamer or its podcasting platform Anchor were involved in the creation of production of the “Soldier of Misfortune” podcast, and pointed out that reports of content infringements can be submitted at https://support.spotify.com/us/report-content.

TheWrap also reached out to Koerner, Rapaport, and The Atlantic for comment. 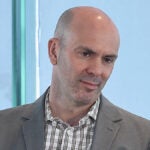 He added that he was tipped off about a different podcast, called Lions Led By Donkeys whose April 4 and April 11 episodes were about Herman Perry, an African-American soldier in World War II who fled into what was then the Burmese jungle after killing his superior officer. Koerner stated, that the episodes are “lifted from my first book, ‘Now the Hell Will Start.’ The debut episode does not mention the book’s title at all. But I recognize every little detail as a product of my labor.”

“When I reached out to voice my concerns, this was the response,” Koerner said, sharing a screencap in which the podcasters apologized and offered to mention the book at the beginning of each episode. “Will this make everything okay? Can a podcast use a writer’s work however it wants, provided it mentions the source material’s title just once in passing? I know what my heart tells me, but, hey, I’m biased.”

Koerner mentioned more troubling incidents in which he felt his work had been stolen, with minimal or no credit, adding, “I have no grand solution, but perhaps we can start a frank discussion about what constitutes fair use for podcasters? The bottomless appetite for compelling yet cheap nonfiction content is becoming an epic bummer for those of us devoted to unearthing untold stories.”

Correction: This story previously misidentified “Soldier of Misfortune” as a Spotify podcast. It has been edited to correct this mistake.