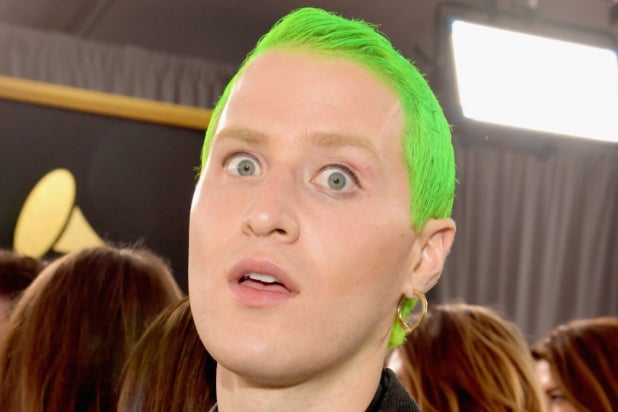 Mike Posner delivered the first significant moment of the Grammy red carpet, with a confounding look and bizarre interviews.

The singer, who clocked a big hit in 2016 with “I Took a Pill in Ibiza,” arrived to Los Angeles’ Staples Center with artist-producer Blackbear sporting neon green hair, a full face of makeup, painted nails and some interesting behavior working the press line.

For starters, Posner would not directly communicate with individual hosts — rather whisper into Blackbear’s ear and have him relay messages.

She indeed is, to businessman Bill Rancic, to which Posner’s ambassador replied: “Tragic.”

His entire vibe immediately prompted social media jokes about taking pills in Ibiza, coming back from Ibiza worse for the wear, having taken more than just pills in Ibiza and so on and so forth. Oh, and Jared Leto’s version of Batman villain The Joker in “Suicide Squad.”

Fans speculated on everything from plastic surgery to drug abuse to brilliant performance art.

Read a smattering of Poser observations:

why is mike posner acting like such a douche?

What actually is happening with Mike Posner though

Mike Posner is going through something

Well, it's been an interesting 3 years for Mike Posner…#GRAMMYs pic.twitter.com/0xSZxn55P5

.@MikePosner looks like the real life version of a Snapchat filter pic.twitter.com/HmwZXp55ki