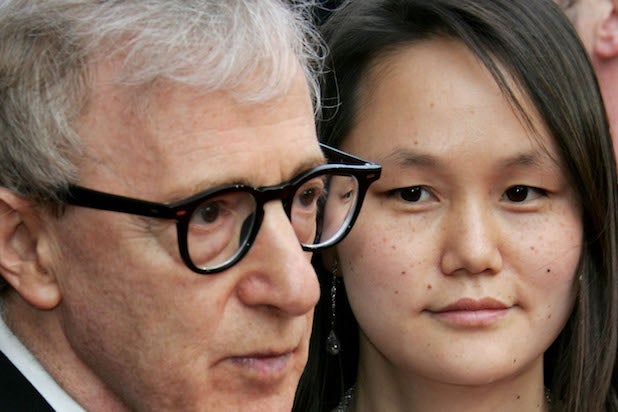 Soon-Yi Previn has broken a long silence about her husband Woody Allen and her adopted mother, Mia Farrow, defending Allen against accusations of abuse and saying she can’t “come up with a pleasant memory” about Farrow.

Farrow accused Allen of sexually abusing their daughter, Dylan, in August 1992 — months after she learned of his relationship with Previn, her adopted daughter with musician Andre Previn. Allen and Soon-Yi Previn married in 1997.

“I was never interested in writing a ‘Mommie Dearest,’ getting even with Mia — none of that,” Previn says in a New York Magazine story posted Sunday night. “But what’s happened to Woody is so upsetting, so unjust. [Mia] has taken advantage of the #MeToo movement and paraded Dylan [Farrow] as a victim. And a whole new generation is hearing about it when they shouldn’t.”

Ronan Farrow has denounced the New York Magazine article as “shameful” and a  “hit job, written by a longtime admirer and friend of Woody Allen’s.”

According to the New York Post, O’Sullivan Farrow believes the same, that writer of the article, Daphne Merkin, was hand-picked by Allen because the two have been friendly for years. The daily paper said that Dylan’s camp pointed to passages from Merkin’s 2014 book, “The Fame Lunches,” in which Merkin wrote that the two met after she sent Allen a fan letter.

Soon-Yi Previn said Farrow, who adopted her when she was a small child, “wasn’t maternal to me from the get-go,” and would “arbitrarily” show “her power” by slapping her and calling her “stupid” or a “moron.” When writer Daphne Merkin asked her for a positive recollection from her years with Farrow, she answered, “It’s hard for someone to imagine, but I really can’t come up with a pleasant memory.”

Previn recalled a time when they all lived on Martha’s Vineyard, where she said she wiggled her way into a paddling pool with her younger siblings, causing one of them to get hurt. That, she said, set off her mother in a tirade.

Also Read: Woody Allen Thinks Ronan Farrow Is His Son - 'But I Wouldn't Bet My Life on It'

“Look what you’ve done! You never listen! I should send you to an insane asylum!” Previn said Farrow screamed. “I was shaking. I was so scared I thought she was actually going to put me in an insane asylum — and I understood what it meant.”

She also said Farrow once held her upside down by her feet “to get the blood to drain to my head. Because she thought — or she read it, God knows where she came up with the notion — that blood going to my head would make me smarter or something.”

Dylan O’Sullivan Farrow and her mother have said that Allen molested Dylan in 1992, when she was 7 years old, in a crawl space in Farrow’s Connecticut home.

Prosecutors did not press charges, and the New York Department of Social Services said it found “no credible evidence” to support the accusation.

Also Read: Woody Allen Says He Should Be 'Poster Boy for the #MeToo Movement'

O’Sullivan Farrow has called the investigation “inaccurate,” saying, “I am credible, and I am telling the truth, and I think it’s important that people realize that one victim, one accuser, matters.”

Her accusation has received new attention in the #MeToo era, with many actors who have worked with Allen in the past — including Timothee Chalamet and “Lady Bird” director Greta Gerwig — distancing themselves from him.

Mia Farrow and her then-husband, conductor André Previn, adopted Soon-Yi in 1977; two years later, their marriage ended in divorce. Shortly thereafter, Farrow was introduced to Allen, and they remained together for 12 years. Along the way, he adopted two of Farrow’s children, including Dylan.

In 1991, Previn, then 21-years-old, and Allen, 56, began an intimate relationship, which Farrow believes started when she and Allen were still together. The affair was discovered after Farrow found nude photographs of her adopted daughter in Allen’s apartment.