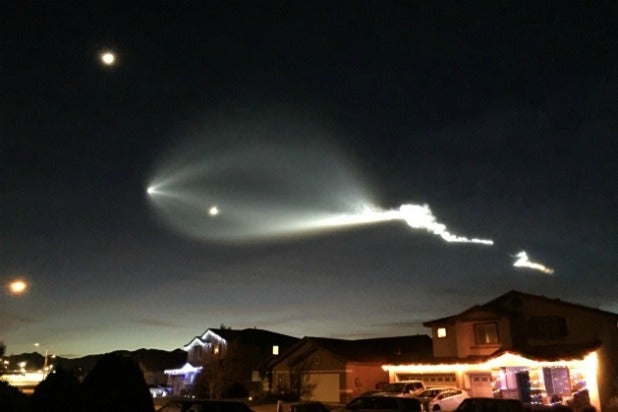 Southern California is used to oddities, but that weird light in the sky above Orange County on Friday night pushed some people right over the edge.

“Freaked the hell out of my grandparents they thought they were witnessing the world ending,” wrote one Twitter user.

The light show seen as far east as Tucson, Arizona, was, actually, a result of Vandenberg Air Force Base launching SpaceX’s Rocket 9. SpaceX was founded in 2002 by Elon Musk with the goal of reducing transportation costs and, ultimately, colonizing Mars.

Rocket 9 carried 10 Iridium-4 satellites to be part of an 81-satellite constellation that will orbit earth to deliver data and voice communications.

But people on social media thought the rocket might be something a little more interesting than that… like an alien invasion.

This is what my family & me saw in the sky above us on the way home from Pasadena. My kids loved it. My wife was scared. My first 2 thoughts were:
1.So the aliens aren't hiding anymore.https://t.co/NY0t5ChWKl did Donald Trump do? https://t.co/h6v5ns30Ev

It was definitely aliens

I’d be open to aliens at this point. https://t.co/m8YiTLiL5J

Me finding out it was a #SpaceX launch and not aliens pic.twitter.com/TpsfT3bDBP

So the UFO was a SpaceX rocket. I’m simultaneously relieved and disappointed. #ufo #spacex

Thanks for making me fear for my life before the holidays.

Sincerely,
A #millennial living in a scary world#SpaceX #WWIII pic.twitter.com/RQr8tKfpja

The SpaceX lunch reminds of that one scene in Austin Powers ????#SpaceX pic.twitter.com/OJ0zYQVFNi

#SpaceX has everyone going crazy, I’m just thinking about all the conspiracy theories ????????

Turns out the aliens only came to earth because they "heard the McRib was back." #SpaceX #Falcon9 #CloseEncounters

And, of course, there’s always a skeptic or two:

If you think this is #spacex chances are you also think Nixon called the moon on a landline. pic.twitter.com/959dXzTy7K

July 8, 1947, the Roswell Daily Record reported the “capture” of a “flying saucer”… and the rest is conspiracy theories history

Alien existence hasn't been proven, but these films encourage our imagination. What better way to celebrate than with an alien invasion movie marathon? Here are eight alien-centric films to watch to mark the occasion.