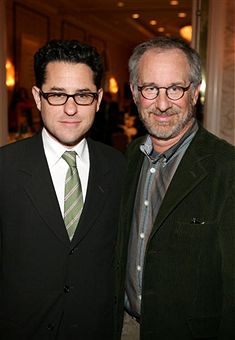 Call it "Collaboration of the Titans."

J.J. Abrams and Steven Spielberg are in discussions to collaborate on a top-secret feature film, reports Vulture.

Vulture quotes an insider who describes the project as "a tip of the hat to [Spielberg’s] movies of the 70’s and early 80’s." Abrams is apparently planning to direct his script himself at some point this fall for Paramount, where the "Lost" creator’s production company, Bad Robot, is based.

Like the Abrams-produced "Cloverfield," the project’s title and logline are being kept under wraps for maximum marketing impact, but according to Vulture, the film "will deal with everyday people whose personal relationships are tested when they are thrown up against extraordinarily fantastic — and possibly other-worldly — events." In other words, the story will draw on the themes and character dynamics present in Spielberg’s "Jaws," "Close Encounters of the Third Kind" and "E.T."

Vulture cites a source who insists that Spielberg will be involved in some capacity, either as an executive producer or as an unofficial adviser, as Abrams wants to make sure that his personal homage to the Oscar-winning director is done properly.

Keeping in line with an insider’s description of the project as the "anti-‘Avatar,’" the budget of the film will be fairly low for a project involving A-List names such as Abrams and Spielberg, whose respective representatives at WME and DreamWorks denied any knowledge of the new project to TheWrap.